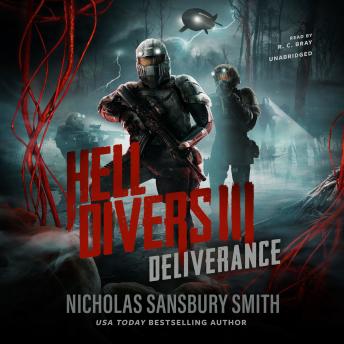 #3 of The Hell Divers Series

They will dive, but will humanity survive?

Left for dead on the nightmarish surface of the planet, Commander Michael Everhart and his team of Hell Divers barely escape with their lives aboard a new airship called Deliverance. After learning that Xavier “X” Rodriguez may still be alive, they mount a rescue mission for the long-lost hero.

In the skies, the Hive is falling apart, but Captain Jordan is more determined than ever to keep humanity in their outdated lifeboat. He will do whatever it takes to keep the ship in the air—even murder. But when he learns the Hell Divers he exiled have found Deliverance, he changes course for a new mission—find the divers, kill them, and make their new ship his own.

In the third installment of the Hell Divers series, Michael and his fellow divers fight across the mutated landscape in search of X. But what they find will change everything.

So far a great series from an amazing author and if your an audio book fan Mr. Bray is always a treat to listen to

This book is a must read. I’m fascinated so far.

Great action and story, you will not be disappointed

X is my hero! Well, perhaps Miles (his bioengineered dog) is my first hero and X is a close second. I have totally binged read this series. I already have Book 4 on pre-order too. The pace is swift, the setting gripping, and the characters engaging. This series has been one of my favorite stories I’ve listened to this year and one of my favorite post-apocalyptic stories of all time. Book 1 was great and Smith has managed to carry that awesomeness throughout the series. Team Raptor, lead by Hell Diver Michael Everhart, spends some quality time on Earth rather than up in The Hive airship. Captain Jordan has rocked off his hinges and Team Raptor was in danger of being exterminated. Now Michael knows that X survived the ending of Book 1, even left a recorded radio message that Jordan was aware of, and now Michael needs to find out if X is still alive. Plus, things in the air aren’t going well. The inhabitants of The Hive will need an earthly home sooner rather than later. Through X, we get to learn more about the remnants of humans and their tech. One of the things I have really enjoyed about this series is that the apocalypse happened further down the timeline so the tech is more advanced than what we have now, but considered remnants by X and the other airship humans. There’s bioengineered animals, and cryogenics, and some AI. This really gives it a near-future scifi feeling as well as being post-apocalyptic. Katrina has done her best to smooth things out with Captain Jordan but he’s gone too far on too many things. She can no longer keep him stable and reasonable. He’s dead set on keeping The Hive in the air no matter the costs; he’s willing to ignore any facts to the contrary. Katrina has to make some hard decisions in this book and I admired her for that. Team Raptor (Michael, Layla, Magnolia, and Roger) come across more dangers than just the Sirens and radiation. As they explore the surface, they discover aggressive plants and evidence that the humans in the sky aren’t the only ones that have survived this long. Once again, Magnolia and her smart mouth was one of my favorite characters. The action propels the story forward and before I knew it, I was done. Now I had to wait for Book 4. The sweet torture! Good thing I can go back and re-read the series before Book 4 comes out. 5/5 stars. The Narration: R. C. Bray is excellent to listen to in this series. He’s aged and rasped up X’s voice so it’s perfect. I love his smart mouth for Magnolia and his angry, frustrated voice for Captain Jordan. There’s some emotional moments in this tale and Bray captures those perfectly. 5/5 stars.