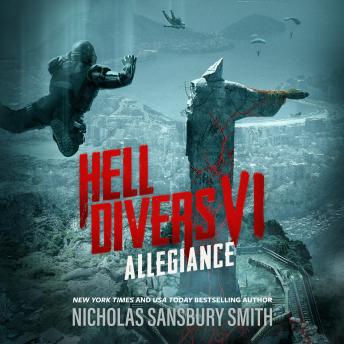 #6 of The Hell Divers Series

The war for the Metal Islands is over, but the search for survivors has just begun.

After a long and bloody battle, legendary Hell Diver Xavier Rodriguez reigns as the dutiful but reluctant new king of the islands. Advised by a council of former sky citizens as well as Cazadores, he works to assimilate the two societies peacefully. But not all Cazadores have accepted the new order.

While X tries to ease tensions at home, a rookie team of divers, led by Michael Everhart, returns to the skies in Discovery, formerly the ITC Deliverance. Their mission: to locate other human survivors throughout the world and rescue them. But Michael’s team aren’t the only ones searching for survivors. A gruesome discovery reveals that android defectors continue to hunt humans across the globe. And they may not be the only ones.

In a race against time, the Hell Divers may be the only obstacle to enemies bent on wiping out the final pockets of survivors and extinguishing the human genome forever.

Love this book can’t wait for the next one

An exciting series with talented narration making it one of the best series I've been listening so far.

This is such a great exciting series! Love X he is my favourite character and Michael... R. C Bray is an awesome reader and I engage with his characters just brilliant... Started book VII straight after

another winner in the hell diver series

Can’t wait for the next book