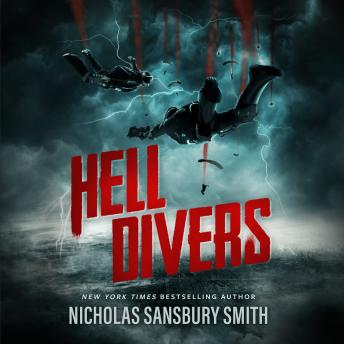 #1 of The Hell Divers Series

They dive so humanity survives …

More than two centuries after World War III poisoned the planet, the final bastion of humanity lives on massive airships circling the globe in search of a habitable area to call home. Aging and outdated, most of the ships plummeted back to earth long ago. The only thing keeping the two surviving lifeboats in the sky are Hell Divers—men and women who risk their lives by skydiving to the surface to scavenge for parts the ships desperately need.

When one of the remaining airships is damaged in an electrical storm, a Hell Diver team is deployed to a hostile zone called Hades. But there’s something down there far worse than the mutated creatures discovered on dives in the past—something that threatens the fragile future of humanity.

I’ve listened to this book twice and it was great both times through. The first go drew me in with this airship and the hell divers and the destroyed land beneath them. The second pass let me appreciate the characters more. Xavier (X to most) and his sorta adopted kid Tin are both great characters. Both have a lot on their shoulders and both save their little society in their own ways. The setting really captured my imagination. Yes, this is post-apocalyptic fiction, but in this world, the apocalypse came a bit further along the human timeline. Even the remnants of the technology that was once available is just beyond what we have now. The Hell Divers jump to gather much needed supplies for their airship, keeping it in the air, away from the worst of the radiation for generations now. But stuff is breaking down, supplies are limited, and the situation becomes more and more desperate. I did get a little chuckle over Hades being what once was Chicago. All those deadly lightning storms! And the monsters dubbed the Sirens! I’m a huge Dresden Files fan and I can just see Harry Dresden rolling over in his grave that Chicago has fallen to lightning and monsters! Even with everything being in a desperate state, politics still plays a role in the management of the ship. So true. I can see why the rebels demand more meds and more food but their efforts end in a body count and could have easily ended them all! The captain was put in a very tough situation. She couldn’t let this minor rebellion grow but any body count earns her a bit more hatred from part of the population. Captain Ash earned my respect with her actions during this crisis. I loved that the ladies were part of every aspect of this story. They were in the military management of the airship. They were Hell Divers. They were teachers, cooks, kids, drug addicted desperate people, etc. For a military post-apocalyptic scifi, this was a very important aspect for me and Smith met the challenge! Yay! It’s only practical to have women be on an equal footing at the end of the world. The action never stops with this book. There were so many moments where I thought for sure this character or that was toast! I was on the edge of my seat the first time I read it. On the second pass, you could still catch me nibbling my fingernails as I relived this scene or that. This was a very enjoyable book! 5/5 stars. The Narration: R. C. Bray is a delight to listen to. His deep voice for X is perfect. His female voices sounded feminine and his little kid voices were realistic. He makes a great Tin as well as a great Captain Ash. The pacing is perfect and he performs those emotional scenes perfectly. 5/5 stars

Great book. A spin on the apocalypse . If your sick of reading about viruses and EMP's this is the book for you. Narration is also well done.

Slow to start but wow what a story

Excellent book I loved it - Highly recommend it!

This book takes a little getting used to however the ride is a great. This story jumps between four people mainly, wever, the resistance, X and the captain. Sometimes it gets confusing but it's worth it, I cannot put this down and ima definitely buy the next one

One of the best post apocalyptic books /great narration

Exellent, this needs to be a movie! The setting is unique and the characters are excellent. Can't wait for more!

Seriously, you just had to kill off X . Oh well. Great story ,keep it up.

Edge of your seat hole way though!

one of the best post apocalypse series of there. NSS is the master at Monster making, he can scare the hell out of a full grown man, lol. epic series, epic characters that I really cared about, and the dark theme is realistic. this series should be made into a tv series. RC Bray is top shelf. buy this book, start this series!!

This title is due for release on July 19, 2016
We'll send you an email as soon as it is available!