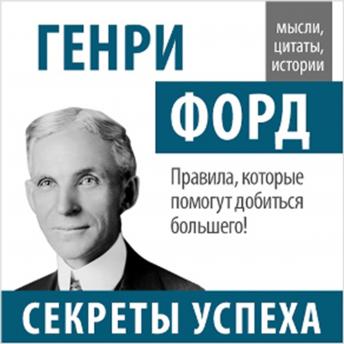 Wisdom of the legendary businessman who stood at the origins of the auto industry!

Creating a convenient and affordable car - that's probably one of the main achievements of Henry Ford. The introduction of conveyor assembly in production allowed to establish a mass production of machines, thereby improving the lives of many people around the world.

Thanks to the innovative ideas for his time, Henry Ford forever entered the history of world business.

Henry Ford was known as a very principled man, who had his own views on how to conduct business. His wisdom was preserved, including in his books, in interviews, in the memoirs of his contemporaries. The brightest and most characteristic quotes from different sources we have collected for you in this audiobook.