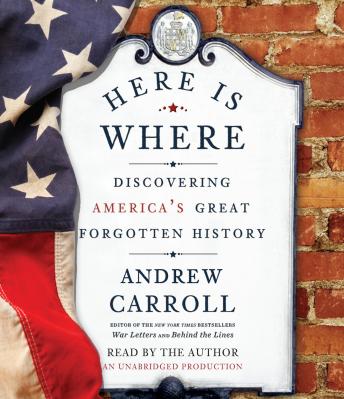 The centerpiece of a major national campaign to indentify and preserve forgotten history, Here Is Where is acclaimed historian Andrew Carroll’s fascinating journey of discovery in which he travels to each of America’s fifty states and explores locations where remarkable individuals once lived or where the incredible or momentous occurred.

Sparking the idea for this audiobook was Carroll’s visit to the spot where Abraham Lincoln’s son was once saved by the brother of Lincoln’s assassin.  Carroll wondered, How many other unmarked places are there where intriguing events unfolded -- or where extraordinary men and women made their mark?  And then it came to him: the idea of spotlighting great hidden history by traveling the length and breadth of the United States, searching for buried historical treasure.

In Here Is Where, Carroll drives, flies, boats, hikes, kayaks and trains into the past, and in so doing, uncovers stories that inspire thoughtful contemplation, occasional hilarity and often, awe. Among the things we learn:

*Where the oldest sample of DNA in North America was discovered

*Which famous FBI agent was the brother of a notorious gangster

*Which cemetery contains one million graves – but only one marked

Featured prominently in Here Is Where are an abundance of firsts (including the first elevator, the first modern anesthesia, the first cremation, and the first murder conviction based on forensic evidence), outrages (from massacres, to forced sterilizations, to kidnappings) and breakthroughs (from the invention of the M-1 carbine to the recovery of the last existing sample of Spanish Flu to the building of the rocket that made possible space travel).

A profound reminder that the ground we walk is often the top sedimentary layer of amazing past events, Here Is Where represents just the first step in an ongoing project that will recruit citizen historians to preserve what should be remembered.