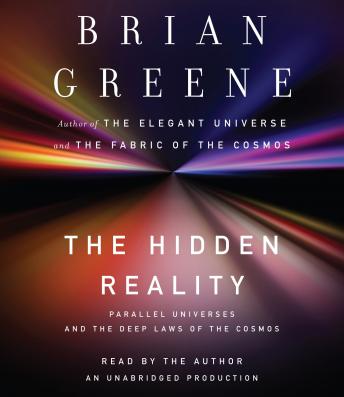 The Hidden Reality: Parallel Universes and the Deep Laws of the Cosmos

There was a time when “universe” meant all there is. Everything. Yet, in recent years discoveries in physics and cosmology have led a number of scientists to conclude that our universe may be one among many. With crystal-clear prose and inspired use of analogy, Brian Greene shows how a range of different “multiverse” proposals emerges from theories developed to explain the most refined observations of both subatomic particles and the dark depths of space: a multiverse in which you have an infinite number of doppelgängers, each reading this sentence in a distant universe; a multiverse comprising a vast ocean of bubble universes, of which ours is but one; a multiverse that endlessly cycles through time, or one that might be hovering millimeters away yet remains invisible; another in which every possibility allowed by quantum physics is brought to life. Or, perhaps strangest of all, a multiverse made purely of mathematics.

Greene, one of our foremost physicists and science writers, takes us on a captivating exploration of these parallel worlds and reveals how much of reality’s true nature may be deeply hidden within them.

An amazing book! Brian Greene is my favorite so far providing a human-readable explanation on absolutely incomprehensible otherwise topics. The narrator is also of great quality.

Fascinating! I enjoyed being introduced to so many different possibilities for reality. I feel that I now have a good understanding (at a high level) of all the work being done in Cosmology.

This title is due for release on January 25, 2011
We'll send you an email as soon as it is available!