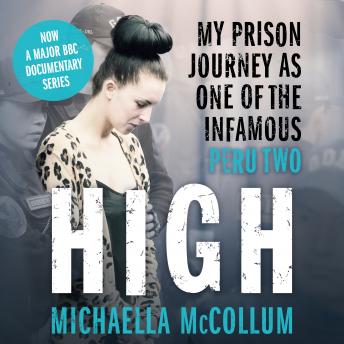 High: My Prison Journey as One of the Infamous Peru Two - NOW A MAJOR BBC THREE DOCUMENTARY

The gritty prison memoir of Michaella McCollum, one half of the infamous 'Peru Two', imprisoned in a Peruvian jail for attempting to smuggle 11kg of cocaine from Peru to Madrid in August 2013.

She was just a regular girl, spending the summer working at a bar in Ibiza, until she was approached by a man who asked her if she'd like to make some quick, easy money...and it would change her life forever. This is the truth of her time in prison, told through her own diaries and letters to her mother, family and friends, recounting tales of vicious guards, psychotic inmates and horrendous prison conditions.

A brilliantly affecting tale of a naïve young girl who starts out in the Ibiza party scene and comes of age in the dark heart of Peru, before finally emerging into the sun a stronger, more confident, mature young woman.

COMING SOON TO BBC THREE - 'HIGH', A DOCUMENTARY ABOUT MICHEALLA'S ARREST, CONVICTION, AND TIME IN A SOUTH AMERICAN PRISON

High: My Prison Journey as One of the Infamous Peru Two - NOW A MAJOR BBC THREE DOCUMENTARY

This title is due for release on October 31, 2019
We'll send you an email as soon as it is available!