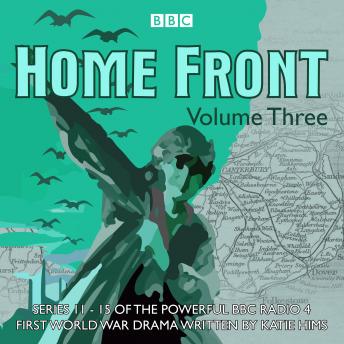 Series 11-15 of the major BBC Radio 4 drama charting life on the home front during the First World War - plus special extended episode Home Front: A Fragile Peace
First heard on radio between 4 August 2014 and 9 November 2018, each episode of Home Front is set exactly one hundred years before the broadcast date, and each follows one character's day. Together they create a mosaic of experience from a wide cross-section of society, mixing historical fact with enthralling fiction to explore how ordinary people coped with daily life in wartime Britain.
Back in Folkestone, the residents are dealing with the after-effects of a devastating air raid. Howard Argent is kept busy at the Bevan, while Ulysses Pilchard experiments with electro-shock therapy. Meanwhile, women's suffrage, prostitution and unmarried mothers are hot topics, and Kitty Lumley experiences the sharp end of intolerance.
In Tyneside, ripples from the 1917 Bolshevik Revolution lead to a rise in union activity, and the factory faces the threat of strike action from the munitionettes.
And in Devon, women, children and prisoners of war are being put to work on the land. With Britain on the brink of starvation, summer 1918's harvest is crucial - but conscientious objectors, unwilling or unable to help, arouse fury.
As the Great War moves towards its end, can the wounded communities back home find some sort of peace, however fragile?
Tackling themes including trauma and madness, industrial unrest, morality and sexuality, surrogate labour and the outbreak of peace are some of radio's foremost dramatists including Katie Hims, Shaun McKenna and Sarah Daniels. Among the extensive cast are Helen Schlesinger, Kathryn Beaumont, Roy Hudd and Billy Kennedy, with guest appearances from Geoffrey Palmer and Mark Heap. Also included is Home Front: A Fragile Peace, a special 75-minute episode which flashes forward to explore the lives of the characters on 10 November 1919.