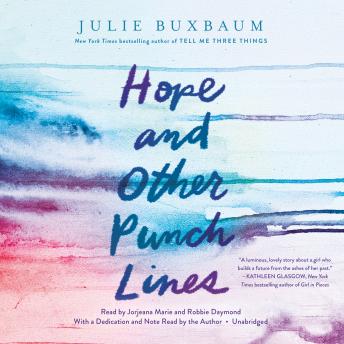 Hope and Other Punch Lines

The New York Times bestselling author of Tell Me Three Things and What to Say Next delivers a poignant and hopeful novel about resilience and reinvention, first love and lifelong friendship, the legacies of loss, and the stories we tell ourselves in order to survive.

'A luminous, lovely story about a girl who builds a future from the ashes of her past.' --KATHLEEN GLASGOW, New York Times bestselling author of Girl in Pieces

Sometimes looking to the past helps you find your future.

Abbi Hope Goldstein is like every other teenager, with a few smallish exceptions: her famous alter ego, Baby Hope, is the subject of internet memes, she has asthma, and sometimes people spontaneously burst into tears when they recognize her. Abbi has lived almost her entire life in the shadow of the terrorist attacks of September 11. On that fateful day, she was captured in what became an iconic photograph: in the picture, Abbi (aka 'Baby Hope') wears a birthday crown and grasps a red balloon; just behind her, the South Tower of the World Trade Center is collapsing.

Now, fifteen years later, Abbi is desperate for anonymity and decides to spend the summer before her seventeenth birthday incognito as a counselor at Knights Day Camp two towns away. She's psyched for eight weeks in the company of four-year-olds, none of whom have ever heard of Baby Hope.

Too bad Noah Stern, whose own world was irrevocably shattered on that terrible day, has a similar summer plan. Noah believes his meeting Baby Hope is fate. Abbi is sure it's a disaster. Soon, though, the two team up to ask difficult questions about the history behind the Baby Hope photo. But is either of them ready to hear the answers?

3 1/2 stars. This book is a fictional story based in the real life event of September 11; Abbi Goldstein, infamously known as Baby Hope, a baby captured in a picture, safe, just as the Twin Towers collapse. The events read like they are real, occasionally pulling in real events. I like Abbi; she is held up as an unwilling idol, memorializing the day for many, bringing tears and hugs, a constant reminder. Now enter Noah, a camp counselor at the same camp Abbi is counseling at in the summer. I don’t like Noah; while we know he has suffered a great loss on this tragic day, he uses blackmail to get Abbi to help him under the guise of a school newspaper article. Abbi is such a kind and sweet soul, the blackmail just feels heartless. And while the two have a slow burn romance, I never move Noah from the not liking category and that makes it hard to root for them. Ultimately, it is a good story, and a hard story to tackle with tact, which the author does. The characters are interesting. Jack, Noah’s gay best friend is trying to figure out if they guy he is interested in is indeed gay too, and Abby’s sassy and smart grandmother is slowly falling victim to dementia.The parents on both side are caring, good parents, even though they have suffered their own share from this day, making a well rounded cast of characters.