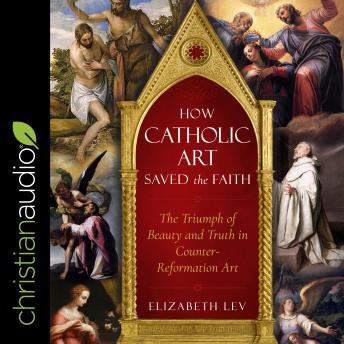 How Catholic Art Saved the Faith: The Triumph of Beauty and Truth in Counter-Reformation Art

Not long after Martin Luther's defiance of the Church in 1517, dialogue between Protestants and Catholics broke down, brother turned against brother, and devastating religious wars erupted across Europe. Desperate to restore the peace and recover the unity of Faith, Catholic theologians clarified and reaffirmed Catholic doctrines, but turned as well to another form of evangelization: the Arts.

Convinced that to win over the unlettered, the best place to fight heresy was not in the streets but in stone and on canvas, they enlisted the century's best artists to create a glorious wave of beautiful works of sacred art-Catholic works of sacred art-to draw people together instead of driving them apart.

How Catholic Art Saved the Faith tells the story of the creation and successes of this vibrant, visual-arts SWAT team whose war cry could have been art for Faith's sake! Over the years, it included Michelangelo, of course, and, among other great artists, the edgy Caravaggio, the graceful Guido Reni, the technically perfect Annibale Carracci, the colorful Barocci, the theatrical Bernini, and the passionate Artemisia Gentileschi. Each of these creative souls, despite their own interior struggles, was a key player in this magnificent, generations-long project: the affirmation through beauty of the teachings of the Holy Catholic Church.

How Catholic Art Saved the Faith: The Triumph of Beauty and Truth in Counter-Reformation Art