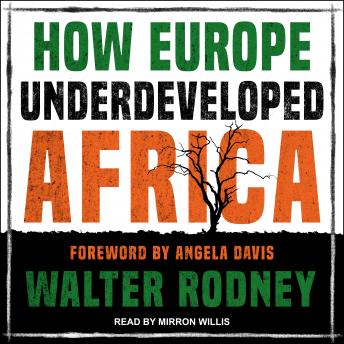 In his short life, the Guyanese intellectual Walter Rodney emerged as one of the leading thinkers and activists of the anticolonial revolution, leading movements in North America, South America, the African continent, and the Caribbean. In each locale, Rodney found himself a lightning rod for working class Black Power. His deportation catalyzed 20th century Jamaica's most significant rebellion, the 1968 Rodney riots, and his scholarship trained a generation how to think politics at an international scale. In 1980, shortly after founding of the Working People's Alliance in Guyana, the thirty-eight-year-old Rodney would be assassinated.

In his magnum opus, How Europe Underdeveloped Africa, Rodney incisively argues that grasping 'the great divergence' between the west and the rest can only be explained as the exploitation of the latter by the former. This meticulously researched analysis of the abiding repercussions of European colonialism on the continent of Africa has not only informed decades of scholarship and activism, it remains an indispensable study for grasping global inequality today.