How I Made My First Million: Sixteen True Stories of How British Tycoons Made Their Fortune 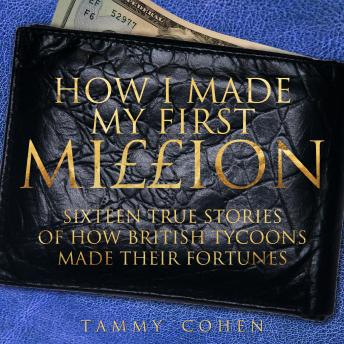 Who doesn't want to be a millionaire? Well, if you have ever wanted to join the growing ranks of British millionaires, then this is the book for you. Here, sixteen self-made multi-millionaires come clean about how they became filthy rich. There's Andrew Reynolds, who grew up in a small caravan, yet went on to make £30 million working from home. And Dominic McVey, who made a fortune importing scooters when he was just 14 and now, ten years on, is head of a thriving cosmetics distribution company. There is no such thing as a 'typical millionaire'. Some are middle-aged, others are barely out of school; some come from nothing, others reinvent themselves after changing careers. In fact, all they have in common is ambition, motivation and the ability to think big.

How I Made My First Million: Sixteen True Stories of How British Tycoons Made Their Fortune

This title is due for release on November 30, 2017
We'll send you an email as soon as it is available!