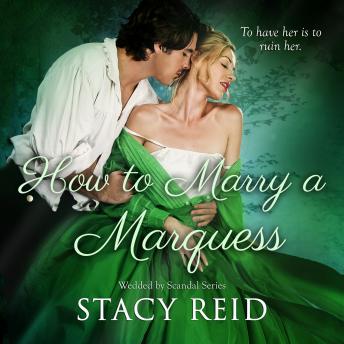 How to Marry a Marquess

Lady Evie Chesterfield is a darling of the ton who refuses to become engaged. She's been desperately in love with her brother's friend, Richard Maitland, Marquess of Westfall, since forever. But the dark, dangerous marquess only sees her as a friend and refuses to marry any woman. When circumstances change and Evie has no choice but to take a husband, she decides to convince London's most notorious gentleman to marry her by seducing the scoundrel. Richard Maitland decided long ago that he wanted nothing to do with love. So when the gorgeous, off-limits Evie asks him for lessons in seduction, Richard knows he's playing with fire. Despite Richard's determination to protect her from his dastardly reputation, he is tested at every turn by his need for the infuriating, but enticing, Lady Evie. Before too long he is faced with making an impossible choice...

How to Marry a Marquess

This title is due for release on December 16, 2019
We'll send you an email as soon as it is available!