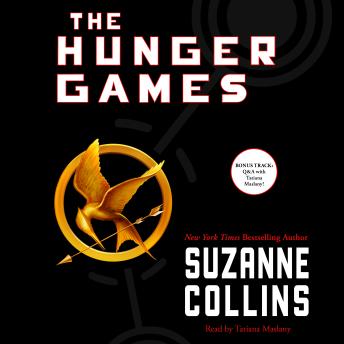 #1 of The Hunger Games

Narrated by: Tatiana MaslanyRun time: 10 hours, 36 minutesIn the ruins of a place once known as North America lies the nation of Panem, a shining Capitol surrounded by twelve outlying districts. The Capitol keeps the districts in line by forcing them all to send one boy and one girl between the ages of twelve and eighteen to participate in the annual Hunger Games, a fight to the death on live TV. Sixteen-year-old Katniss Everdeen regards it as a death sentence when she steps forward to take her sister's place in the Games. But Katniss has been close to death before-and survival, for her, is second nature. Still, if she is to win, she will have to start making choices that weigh survival against humanity and life against love.This audiobook includes a bonus track Q&A with Tatiana Maslany!

I have read all the books, and I have seen the movies as well ( both really great in my opinion) . I recently purchased all of the audio books to listen to at work to make the time go by - and I must say i was NOT disappointed. The Narration was spot on, I loved Tatiana Maslany. The emotion and grit she had made you feel like you were really listening to Katniss. She even sounds SO much like her, too. It was well done.

wonderful story pulls you right in. narrator did a wonderful job in making the characters come alive.

Really sets the stage for the next two books. If you haven't read these books, what are you waiting for?!

the narrator picked sounds a lot like how I pictured Katniss to sound.

Book is absolutely amazing at middle and end.Filled with excitement and also suspension. One of my favorite books.

Better than the movie. love it

an Amazing series!!! Kept me hooked the whole time

I like the book alot. To be honest i expected it to be better than the movie but i dont think it is. Now it does give a different perspective which you cant see in the movie which is pretty interesting. I dont quite like the peta voice but its alright, worth a listen for sure! I heard book 2 is better so cant wait to listen to that!

My homeroom class listens to a bit together every morning. The students are always disappointed when I have to stop the story. Great narrator who really makes the story come to life!

amazing book amazing SHOWING of the story not just telling

Love the book and love the narration

Fantastic. Kept me wanting to listen to more every time.

Amazing performance my Tatiana Maslany! Loved the book and the death of Rue really got me!

This is one of the best book series I'd listen to

So much better than the movie! The whole family enjoyed it. We are now on to Catching Fire.... The narator is excellent!!!

I am rereading this book, or listening rather, for a course at my University. It is really amazing being able to appreciate how well this was put together. I'm only on chapter 19 now but I'm already loving reliving it all and learning things I didn't before.

This is one of my go-to series, I've read this more times than I can count. Great concept, great writing & wonderful narration.