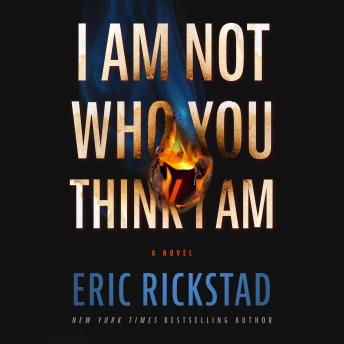 I Am Not Who You Think I Am

A New York Times Best Thriller of the Year

An Amazon Best Book of the Month

An Apple Best Book of the Month

“A tale not just of profound misunderstanding but dynastic wealth and dysfunction, of how money and power can warp a community…[A] shocker of a finale.” —New York Times

''Wicked and smart. Everything you want in a great thriller.'' —Adrian McKinty, New York Times bestselling author of The Chain

From the New York Times and internationally bestselling author

Wayland Maynard is just eight years old when he sees his father kill himself, finds a note that reads I am not who you think I am, and is left reeling with grief and shock. Who was his father if not the loving man Wayland knew? Terrified, Wayland keeps the note a secret, but his reasons for being afraid are just beginning.

Eight years later, Wayland makes a shocking discovery and becomes certain the note is the key to unlocking a past his mother and others in his town want to keep buried.

With the help of two friends, Wayland searches for the truth. Together they uncover strange messages scribbled in his father’s old books, a sinister history behind the town’s most powerful family, and a bizarre tragedy possibly linked to Wayland’s birth. Each revelation raises more questions and deepens Wayland’s suspicions of everyone around him. Soon, he’ll regret he ever found the note, trusted his friends, or believed in such a thing as the truth.

I Am Not Who You Think I Am is an ingenious, addictive, and shattering tale of grief, obsession, and fate as eight words lead to lifetimes of ruin.

When one hears the lines, "I am old now...." at one point in the book and then that the "I" is 52, one knows that one is in the presence of a young and immature writer. That is what the whole book said to me. The juvenile comments that are slung around and the highly implausible plot made for a very disappointing listen. I was looking for something "real" and gritty. I do not know why or how the NYTimes recommended this as one of the best thrillers of the year - it often sounded almost like Gothic (genre). In my view, neither the plot nor the writing merit the accolades that have been heaped upon it. The narrator was good. He couldn't help the (once again) juvenile language that he had to read.

Cheap, cheesy, toilet fiction. The writing is briefly okay at the beginning, but soon any sense of effort on the author's part evaporates and the skeletal reality of what passes for a mystery these days is excrutiatingly revealed. The worn-out 1st person thing is so overused, and like other practitioners of this dry perspective, the author struggles to offer us a single advantage to using it. It brings no deeper understanding of the mind of the generic fiction protagonist who serves as the main character, except to fill up space in paragraphs where the writer had nothing else to say. He just sticks in a 'I felt' sentence so the paragraph looks longer. The generic fiction protagonist, whom the author names 'Wayland' and who is apparently a sixteen-year-old 'kid', has absolutely no arc. He begins as a warped angry depressed loser and ends up as a warped angry depressed loser, only add a completely nonsensical murder scene in a convenient graveyard and a ridiculous 'family secrets revelation' scene, complete with a burning mansion (oh so original), to give his character all the depth of a kiddie pool. And then he shoots himself. How exciting. It's this kind of lazy, cynical writing that kills modern fiction. None of the characters have anything approaching nuance, maybe with the sole exception of Clay, but then the generic fiction protagonist 'kid' kills him just for fun in a graveyard and goes on mostly like nothing happened. The only time the generic fiction protagonist has emotions is when the author tells you he does, like 'I was furious' or 'I said, furiously.' But the smart, catchy 80s dialogue saves it though, right? No. The throat-clutchingly awful dialogue scenes are almost impossible to endure and never once make you feel like these are real 80s teenagers talking. Several times, I tore my earphones out to listen to better things, like a blender loaded with rocks, or the desperate pleas of my inner self begging me not to torture it anymore by continuing to listen to this garbage. The narrator isn't my favorite. Everyone sort of sounds the same, but I have to cut him some slack, because all the characters, as written, are pretty much the same, except that the author came up with different names and pronouns for each of them. Really, the author could have saved himself the energy and just called everybody things like 'generic fiction protagonist's mom' or 'generic fiction protagonist's best friend/rival' or 'generic fiction protagonist's love interest', because none of the auto-generated 'characters' hold your attention long enough to deserve even having a real human's name. The narrator seemed to give his best shot at performing these derivatively written roles, but it has to be difficult to bring life to junk like this and you can sort of tell he probably wasn't impressed with the source material. He's read better books and his narration in those was better. Go figure. So I respect his trying so hard to prop up such mediocre and sometimes insultingly laughable stuff, but he can only do so much. You could choose to believe the highly sophisticated gate-keepers of modern fiction over at the NY Times, but honestly, unless you're the kind of person who enjoys having your intelligence thrown into a meat-grinder and your expectation of a quality whodunit spit on repeatedly, then just skip this one.

This should be young adult fiction. A total let down.

Very intriguing with an excellent plot twist! Will keep you guessing!!

Weird twisty plot. Sad to learn of lessons received when u jump to conclusions. Good WHO DONE WHAT book. Quick listen.

The narrator got a bit grating overtime, but I was able to overlook that because the book was so compelling. From start to finish Wayland takes you on a journey from his 16-year-old perspective. At times you wonder if what he’s telling is true or over exaggerated. No matter what the ending will still surprise you.