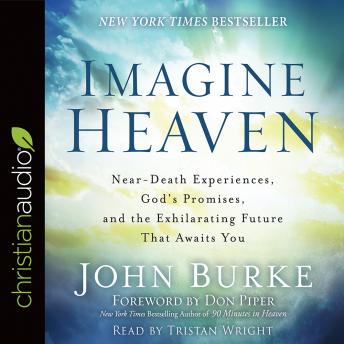 Imagine Heaven: Near-Death Experiences, God's Promises, and the Exhilarating Future That Awaits You

All of us long to know what life after death will be like. Bestselling author John Burke is no exception. In Imagine Heaven, Burke compares over 100 gripping stories of near-death experiences (NDEs) to what Scripture says about our biggest questions of Heaven: Will I be myself? Will I see friends and loved ones? What will Heaven look like? What is God like? What will we do forever? What about children and pets?

For decades, Burke has been studying accounts of survivors brought back from near death who lived to tell of both heavenly and hellish experiences. While not every detail of individual NDEs correlate with Scripture, Burke shows how the common experiences shared by thousands of survivors--including doctors, college professors, bank presidents, people of all ages and cultures, and even blind people--point to the exhilarating picture of Heaven promised in the Bible.

This thrilling journey into the afterlife will make you feel like you've been there. It will forever change the way you view the life to come and the way you live your life today. You'll discover Heaven is even more amazing than you've ever imagined.

Imagine Heaven: Near-Death Experiences, God's Promises, and the Exhilarating Future That Awaits You

This title is due for release on July 27, 2017
We'll send you an email as soon as it is available!