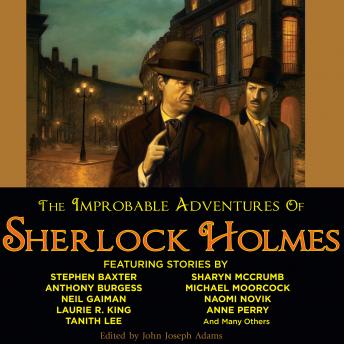 The Improbable Adventures of Sherlock Holmes

“Once you elminate the impossible, whatever remains, no matter how improbable, must be the truth.”Twenty-eight tales of mystery and imagination detailing the further exploits of the world’s most famous detective, Sherlock Holmes, as told by today’s greatest storytellers:“A Sherlockiana Primer” by Christopher Roden
“The Horror of the Many Faces” by Tim Lebbon
“The Case of the Bloodless Sock” by Anne Perry
“The Adventure of the Other Detective” by Bradley H. Sinor
“A Scandal in Montreal” by Edward D. Hoch
”The Adventure of the Field Theorems” by Vonda N. McIntyre
“The Adventure of the Death-Fetch” by Darrell Schweitzer
“The Shocking Affair of the Dutch Steamship Friesland” by Mary Robinette Kowal
“The Adventure of the Mummy’s Curse” by H. Paul Jeffers
“The Things That Shall Come Upon Them” by Barbara Roden
“Murder to Music” by Anthony Burgesss
“The Adventure of the Inertial Adjustor” by Stephen Baxter
“Mrs. Hudson’s Case” by Laurie R. King
“The Singular Habits of Wasps” by Geoffrey A. Landis
“The Affair of the 46th Birthday” by Amy Myers
“The Specter of Tullyfane Abbey” by Peter Tremayne
“The Vale of the White Horse” by Sharyn McCrumb
“The Adventure of the Dorset Street Lodger” by Michael Moorcock
“The Adventure of the Lost World” by Dominic Green
“The Adventure of the Antiquarian’s Niece” by Barbara Hambly
“Dynamics of a Hanging” by Tony Pi
“Merridew of Abominable Memory” by Chris Roberson
“Commonplaces” by Naomi Novik
“The Adventure of the Pirates of Devil’s Cape” by Rob Rogers
“The Adventure of the Green Skull” by Mark Valentine
“The Human Mystery” by Tanith Lee
“A Study in Emerald” by Neil Gaiman
“You See But You Do Not Observe” by Robert J. Sawyer

This title is due for release on January 19, 2010
We'll send you an email as soon as it is available!