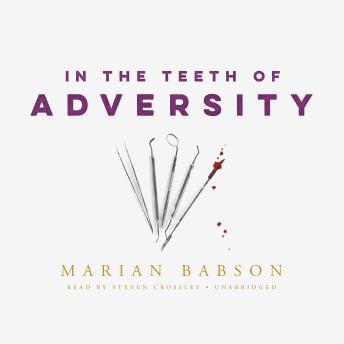 In the Teeth of Adversity

Doug Perkins, his partner Gerry, and their cat, Pandora, have one job to do: spin gaffes into gold. But this cozy little London PR agency-a better environment for Pandora than profits-is about to be involved in a disastrous affaire dentaire. Endicott Zayle, dentist to the rich and famous-as well as to Doug and Gerry-has a problem of royal proportions. He just killed a beautiful woman with an experimental anesthetic. Or did he?

By the time Doug arrives on the scene, the corpse is up and walking around-and someone else is dead instead. With Endicott losing his grip, and a line of women all claiming personal interest in the deceased, scandal is afoot. And so is a second dose of murder. For Doug, Perry, and Pandora, making this mess look good will mean sorting through an old man's madness, a young man's foolishness, and a tooth-and-nail case of cat fighting-no holds barred.

"Those who dread the dentist's chair will crack a smile at this uproarious fourth and final volume in Babson's Perkins and Tate series...A hilarious cast of characters...This is a Mad Hatter's tea party in the dental surgery, with murder thrown in and a Siamese cat taking the role of the dormouse, pouncing at opportune moments. Sparkling comedy."-Publishers Weekly

In the Teeth of Adversity

This title is due for release on April 1, 2016
We'll send you an email as soon as it is available!