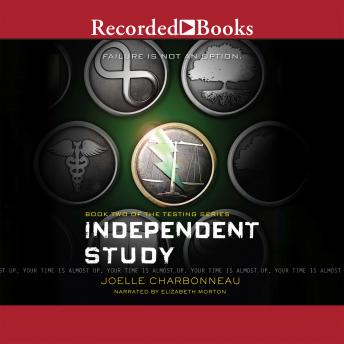 Seventeen-year-old Cia Vale survived The Testing, as has Tomas, the boy she loves, and they have both gained admission to the University. She has a promising future as a leader of the United Commonwealth and no memory of her bloody testing experience, thanks to a government-sanctioned memory wipe. Cia should be happy but is plagued by doubts about the past and future. Determined to find the truth, she embarks on a path of study forbidden by the government delving into the Commonwealth's darkest secrets. What she finds is the brutal reality lurking behind the friendly faces of her classmates and the unbearable realization that leaders chosen to protect us can be our greatest enemy.

This is a reasonably good series. I like the story; however, it is very similar to Hunger Games. Regardless, the characters and action are interesting and keep me coming back to find out how this will play out. I appreciate that the book is clean in the sense that there is very little bad language and no sex or even talk of sex between these young adult characters. A story can be good on its own merits without adding elicit material. This is definitely something that I would allow all of my children to read. However, I have had a hard time with the narrator. She does a good job on the female, main charater's voice. But the voices of the male characters are cringe worthy. I almost did not want to listen to the second book because I did not know if I could deal with her vocal portrayal of Thomas, Will, and the other male characters. All of them are made to sound younger than their years, stupid, and all alike. I would have rather the narrator just use the same voice throughout (her natural speaking voice is nice) and not even try to do any variety. Thomas' voice makes me dislike him and distrust him from the beginning. He sounds like a total idiot and out of the main character's league. i was hoping the second or third books would have had a new narrator, but no such luck.

This is a good book! I'm excited to read the last one in the series!