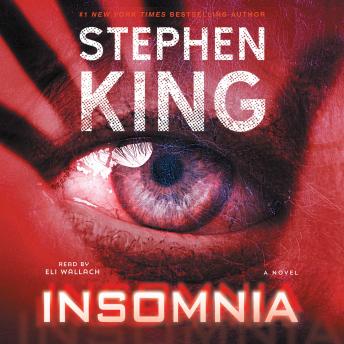 A #1 national bestseller—“A yarn so packed with suspense, romance, literary reference, fascinating miscellaneous knowledge, and heart that only Stephen King could have written it. Marvelous—that is, full of marvels” (Booklist).

Since his wife died, Ralph Roberts has been having trouble sleeping. Each night he wakes up a bit earlier, until he’s barely sleeping at all. During his late night walks, he observes some strange things going on in Derry, Maine. He sees colored ribbons streaming from people’s heads, two strange little men wandering around town after dark, and more. He begins to suspect that these visions are something more than hallucinations brought on by lack of sleep.

There’s a definite mean streak running through this small New England city; underneath its ordinary surface awesome and terrifying forces are at work. The dying has been going on in Derry for a long, long time. Now Ralph is part of it…and lack of sleep is the least of his worries.

Returning to the same Maine town where It took place, a town that has haunted Stephen King for decades, Insomnia blends King’s trademark bone-chilling realism with supernatural terror to create yet another masterpiece of suspense.

Great story and well-written. I don't mind the slow start and character building. Whoever thought it was a good idea to put that obnoxious music between chapters should be slapped. It's completely distracting and unnecessary. I can't imagine who would think it was a good idea and for what purpose. however the story itself was very entertaining if you could get past the stupid music.

This book spends half the time letting Mr King voice his personal pro abortion views through his fictional characters. Not interested! I listen to his books to be entertained with horror stories. The story itself wasn't very good to begin with but became unbearable because of his lame attempt to hop on a soap box. Also the music between chapters is a very bad idea. I don't listen for music either! Don't waste your time and money with this book!

This is an amazing book and I highly recommend it, especially to any Stephan King fans, although the narrator was very slow and didn't announce the section of the book or the chapter. These factors made the listening experience less enjoyable.

This was a good book, although it is a slow starter. I don’t like the way it paints the pro life people as insane maniacs, though. I almost stopped listening for that reason because it began to sound more like a political statement than a story meant to entertain. However, once I got past that, it was a good story. The characters are well developed and the imagery is strong, as is the case with other works by King that I’ve read. The narrator read very well, I thought. I didn’t mind the music because it helped to set the tone for the different happenings in the story, although I will say that it was too loud at times. I found myself adjusting the volume to hear the reader over the music.

If your looking for king’s political views, than this is a book for you. If not take a pass on this one. Just disappointing.

Sorry, I usually enjoy SK books but the music interludes take me out of the story. Whoever thought that loud obnoxious music out of nowhere was a good idea needs to rethink there job. Had to shut it down and write off the credit. Maybe there’s a way to let people know that there’s music in the book. Man that sucked!!!!

Great story, very well narrated. But why the (lway too loud) music at the end and beginning of chapters? It is extremely annoying and at times even making it impossible to actually hear the words.

You must listen carefully so not miss a second of this narrative. I’m not sure I liked the narrator, hard to hear or understand at times. Loved the story I’m glad to hear truth to power on the abortion rights

I was so confused by this book. not my favorite Stephen King book at all...very strange.

This book is narrated by Winnie The Pooh...and I’m here for it.

could have done without the music

of all the Stephen King books this is the one I wish they'd make into a movie. its the first hard cover I read by him and I just love it. ive read it many many times and now im so glad I can listen since my eyes are bad and listening is just so much better. and the narrator is great.

Great story, excellent reader - but there are occasional bits that have "creepy" music in the background. The music gets so loud that it becomes almost impossible to listen to the guy just tell the story. If the music was was just toned down it would be great. It's just completely unnecessary and distracting - fortunately not constant. Should have been mixed better.

As a fan of nearly every other Stephen King book, what on earth happened here? The narrator certainly brings to life the characters of the few hellaciously uninteresting old people the book centers around. Of the hundreds of audiobooks I’ve listened to, this is the first one I have simply turned off with only two hours to go. Not worth it.

SO.... this book, in general, has a great story and I love how original it is. Stephen King's books never disappoint, in my opinion. The narrator did a great job for this book. He really made himself sound like how I pictured Ralph's real voice would sound. I like when narrators are able to portray a character that well just by using their voice. THE ONLY REASONS this didn't get the full 5 stars for the narration rating was because of the weird music they chose to put at the end of certain parts in the story. I couldn't really tell when/if a chapter was ending, but I'm assuming that the music was placed at the end of each chapter. Maybe? That brings me to my second issue with this book... the narrator never said, "Chapter One" and so on... he only mentioned the "Parts" of the book -- i.e. "Part One" or "Part Two", etc.. I could be wrong but I think it's important to include that, and I prefer to be told when a chapter is ending/when a new chapter is beginning. Overall, other than the weird music that made me cringe sometimes because it was so awful, the book itself was great and I would of course listen to another Stephen King book ANY DAY... even if it had that same strange music in the narration!

This is one of my favorite Stephen King books, one i would love to see made into a movie ! Love the way it makes reference to some of the other stories and books the author has written although I have to admit the music is .... annoying when it gets loud between chapters but I have to say I like it when it plays quiet giving the story an eeriness that keeps one drawn into the book making it hard to put down and makes you want to do nothing but pick it back up and listen on, when you do. Thank you Mr. Stephen King for writing such captivating Books stay well and write on ;)

For the most part it was a great book. What I didn’t like about the recording was the music/noise that was played during the beginning/end of chapters. It was distracting and irritating. Also Atropos sounded like an angry George Costanza.

Probably my least favorite Stephen King book. It’s very slow and I just don’t understand why anything is happening and the ending isn’t a good enough payoff for this long boring story. Narration was okay, but not great since a lot of the characters are old so they all have that same voice. I would suggest Tommyknockers or Four Past Midnight in place of this book.

Would have been good but the music at the beginning and end of each chapter was so loud and so distracting I couldn't pay attention. Super annoying. Book was interesting as most Stephen King books are.

This is one of my most favorite novels from Stephen King ?

Decent listen. Did not care for the background music. Distracted from the experience

Not my favorite Steven King book but it was good one. I love the tie in the the Dark Tower. I also feel I greater understanding of what it means to get old after reading this, however all the constant complaing from the characters about getting old got annoying after the first few hours. I really dont think old people complain about theyre age that much. Other than those complaints I really enjoyed this book and recommend it.

This is my all time favorite book! Absolutely amazing. It's a slow starter, but once things pick up and you get clued in on what is happening, it's impossible to put it down. The narrator is PERFECT and his voice is just right for this story. My only problem is the music. It's brief, but sometimes when it happens you cannot hear the Narrator, and if you're wearing headphones it might hurt your ears.

Im a big Stephen King fan and almost finish listening to most of his books on audiobooks. The first half of this one is a little boring. It doesn't really get interesting towards the end and the end is quite sad.

I cried at the end. What a beautiful and moving story. I think I will need to sit here a while and think it over. The narrator was perfect also. I love Stephen King for his ability to look deeply into the dark and the light with a fine imagination. This may be one of my favorites.