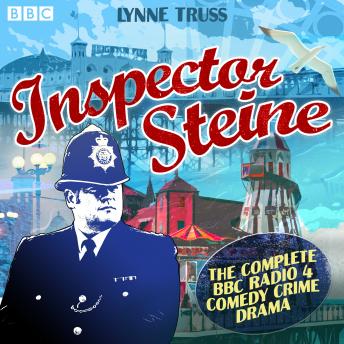 Brighton, 1957: a sunny seaside resort with a sinister underbelly. This den of villainy is policed by the touchingly innocent Inspector Steine, who naively believes he wiped out all the hoodlums in the Middle Street Massacre six years earlier. Can long-suffering Sergeant Brunswick and keen Constable Twitten persuade him that a criminal mastermind is at large - and that the station's charlady, Mrs Groynes, might bear investigation?

Inspector Steine - A headless corpse on the ghost train, a murdered theatre critic, a bank robbery and a beautiful fish-and-chip-shop owner spell trouble for the hapless Inspector. Meanwhile, a deranged criminal escapes from Broadmoor seeking revenge...

The Casebook of Inspector Steine - A matinee at the Hippodrome gives Mrs Groynes an idea, a day out in a vintage car proves eventful, Brunswick organises a police open day and goes undercover in a girls' school, and Steine meets a shady aristocrat - and finds his life in danger.

The Adventures of Inspector Steine - When his chance to shine is scuppered by Steine, Brunswick wants to kill him. But is he behind the attempts on Steine's life - or could it be the Unknown Villain, or old adversary Mrs Vine? Events are further complicated by a criminal convention and the reappearance of Brunswick's old flame, Doris...

The Return of Inspector Steine - Second World War bomb disposal hero Captain Hoagland limps into the station, with an award for Sergeant Brunswick and a head in a box. The latter is a warning that Adelaide Vine is back - and sadistic criminal Terence Chambers is heading for Brighton too, hell bent on havoc.

Christmas for Inspector Steine - It is December 1957, the year of the Queen's inaugural Christmas broadcast and Mrs Groynes' first seasonal celebrations with new husband Captain Hoagland. But only Twitten has the festive spirit...

This title is due for release on February 24, 2022
We'll send you an email as soon as it is available!