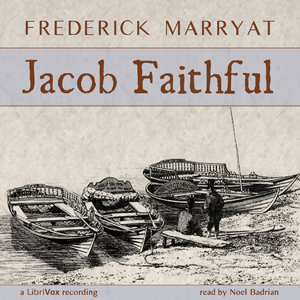 Rebelling against the career chosen for him by his wealthy family, Frederic Marryat joined the Royal Navy in 1806 at the age of 14. He first served as a midshipman in the 38-gun frigate "HMS Imperieuse" commanded by Lord Cochran, 10th Earl of Dundonald whose real life exploits were used by Marryat in his fiction and which formed the basis for other famous fictional characters like Horatio Hornblower and Jack Aubrey. Having survived more than 50 sea battles and attained the rank of Post Captain, he resigned from the Navy and devoted the rest of his life to writing, drawing a good deal on his distinguished career in the Navy and is now considered the Father of Modern Nautical Fiction. He is also noted as the inventor of an effective lifeboat and a widely used system of communicating at sea by the use of flags.

Jacob Faithful is a tale centred on the lives of the Thames watermen who made their living along the tidal reaches of that river and in the Port of London. Particularly it deals with the story of young Jacob literally born and raised on the river. He is orphaned in bizarre circumstances, gets an education, is apprenticed to a bargeman and then to a wherryman before being "pressed" into the Royal Navy. The book gives an interesting insight into the life of London and it's great river at the beginning of the 19th Century. (Summary by Noel Badrian)

This title is due for release on September 7, 2016
We'll send you an email as soon as it is available!