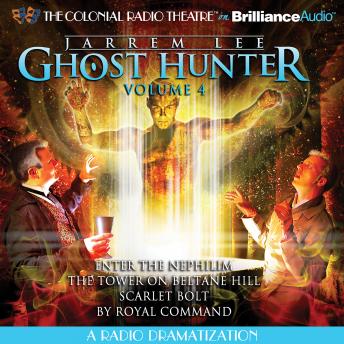 In science one reasons by analogy, so when mankind is confronted by experiences entirely beyond his understanding it takes an individual with intelligence and bravery in equal measure to push back the boundaries of the unknown.... In London, in the 1900's, the solutions to Supernatural occurrences were investigated by a man who was famous for his dealings with the unknown, and the worlds of the dead ..... Jarrem Lee - Ghost Hunter ..... Meet Jarrem Lee, Ghost Hunter (or as he prefers to call it, a psychical detective). With the help of college student Arthur Bennett, he embarks on a series of spine tingling and exciting adventures in the world of the dead. Episode 13: Enter the Nephilim. The Sprits of the Nephilim want Lee to bring them back to Earth. Episode 14: The Tower on Beltane Hill. Mysterious deaths are occurring when a wealthy land owner is trying to clear away trees on his property. Episode 15: Scarlet Bolt. The Derby is the oldest horse race in the world. When the favorite, Scarlet Bolt, is haunted by a mysterious apparition, Jarrem Lee is called in to prevent a terrible tragedy. Episode 16: By Royal Command. Crown Prince Karl is convinced he's been attacked a werewolf. Jarrem Lee is commissioned to persuade him otherwise, but what if his terrifying dreams are really true? Based on a story by Max Rittenberg.

This title is due for release on February 15, 2013
We'll send you an email as soon as it is available!