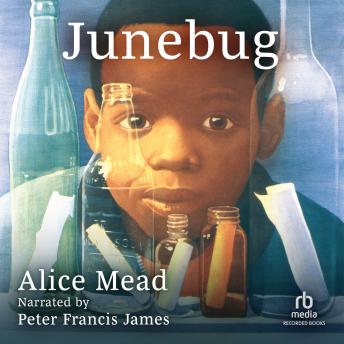 In the dingy Auburn Street project where Junebug lives, ten is the age when young boys start joining gangs and helping drug dealers. Junebug has watched his friend, Darnell, drift away in a sleek, dark-windowed car. He has seen his Aunt Jolita, surrounded by a cloud of jewelry and perfume, strut off with silent gang leaders. Junebug's mother works hard to keep him and his little sister safe. So do the librarian and the tutor who set up a reading room in the basement of the graffiti-coated apartment building. But Junebug is afraid; his tenth birthday is coming up soon. Alice Mead is a former teacher in inner-city schools. In Junebug, she gently portrays a dangerous world as seen through the eyes of a child who refuses to give up his optimism and hope. The voice of narrator Peter Francis James adds a warmth to this tale that allows Junebug to step from the page into the listener's heart.