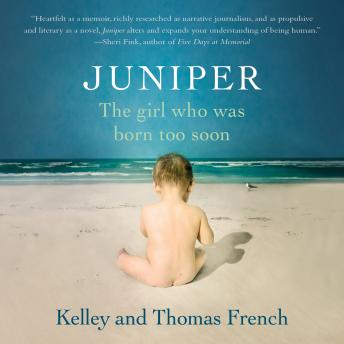 Juniper: The Girl Who Was Born Too Soon

A micro-preemie fights for survival in this extraordinary and gorgeously told memoir by her parents, both award-winning journalists.

Juniper French was born four months early, at 23 weeks' gestation. She weighed 1 pound, 4 ounces, and her twiggy body was the length of a Barbie doll. Her head was smaller than a tennis ball, her skin was nearly translucent, and through her chest you could see her flickering heart. Babies like Juniper, born at the edge of viability, trigger the question: Which is the greater act of love -- to save her, or to let her go?

Kelley and Thomas French chose to fight for Juniper's life, and this is their incredible tale. In one exquisite memoir, the authors explore the border between what is possible and what is right. They marvel at the science that conceived and sustained their daughter and the love that made the difference. They probe the bond between a mother and a baby, between a husband and a wife. They trace the journey of their family from its fragile beginning to the miraculous survival of their now thriving daughter.