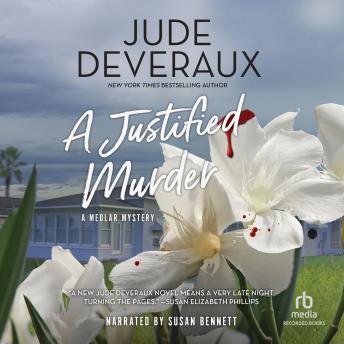 New York Times bestselling romance author Jude Deveraux continues her breakout Medlar Mystery series with a twisted tale of guilt and revenge. The small town of Lachlan, Florida, was rocked last year when two bodies were uncovered in the roots of a fallen tree. Despite their lack of investigative experience, Sara Medlar; her niece, Kate; and Jack Wyatt found themselves at the center of the mystery, working together to reveal the truth behind a decades-old secret in the sleepy town. After a narrow escape, they vowed to never again involve themselves in something so dangerous-until Janet Beeson is murdered. When Janet's body is discovered, everyone is shocked by the violence of the attack. The sweet little old woman has been shot, stabbed and poisoned, but no one can imagine who would want to harm one of the town's kindest, most helpful residents. Sara, Kate and Jack are determined to leave this case to the professionals. But they are soon bombarded by townspeople eager to tell their stories and clear their names with the trio who solved the Morris murders. Even the sheriff is hoping they'll lend their skills to a crime that seems to have no explanation and no motive. And once the town gets talking, they begin to see that there are more secrets buried in quiet Lachlan than anyone could have imagined.

Call me easily distracted and a bit juvenile but the frequent reference “ Jack asked” took away from the read:)

Great story from one of my favorite authors. I love the characters and their relationships. The narrator is not my favorite but it could also be the way it’s written. There is an over use of “jack asked”. But she also once says Jake…

Intriguing story line. Amusing interactions & dialogue among the 3 main characters. Love the narrator’s talent & skill in giving voice to the various characters; personalities really come across because the narrator is so good. I do agree with the post on ‘Jack asked…’ being used too often & distracting (in a funny way). I actually liked the ‘gray’ & ‘ambiguous’ ending. Lets you make your own conclusion.

I agree with the comment that the first book was the best. This book was good to but I would have liked to know who killed her since that was what the whole plot was about. Even so it had drama, humor, suspense which made a fabulous story.

So good!!!! Read all three of these books, in order, so you get a true understanding of the characters. Would love another addition to the series to see where it takes Jack, Kate and Aunt Sarah! As soon as I finished, I immediately listened to it again. Even better the second time around!!!

Not as good as the #1 Medley mystery but still very enjoyable. Unpredictable ending.