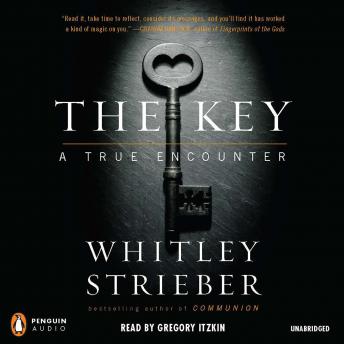 The Key: A True Encounter

From the bestselling author of Communion comes the mysterious true story of how an unknown visitor barged into Streiber's hotel room late one night--and imparted extraordinary lessons in personal development and man's fate that challenge us to rethink every assumption about the meaning of life.At two-thirty in the morning of June 6, 1998, Whitley Streiber was awakened by somebody knocking on his hotel room door. A man came in, and everything he said was life-altering.This is the unsettling and ultimately enlightening narrative of what happened that night. Strieber was never really sure who this strange and knowing visitor was--a 'Master of Wisdom'? A figure from a different realm of consciousness? A preternaturally intelligent being? He called him the Master of the Key. The one thing of which Strieber was certain is that both the man and the encounter were real.The main concern of the Master of the Key is to save each of us from self-imprisonment. 'Mankind is trapped,' the stranger tells Strieber. 'I want to help you spring the trap.' In a sweeping exchange between Strieber and the stranger--which takes the form of a classical student- teacher dialogue in pursuit of inner understanding--the unknown man presents a lesson in human potential, esoteric psychology, and man's fate. He illuminates why man has been caught in a cycle of repeat violence and self-destruction--and the slender, but very real, possibility for release.In its breadth and intimacy, The Key is on par with contemporary metaphysical traditions, such as A Course in Miracles, or even with the dialogues of modern wisdom teachers, such as D.T. Suzuki and Carl Jung.

This title is due for release on May 12, 2011
We'll send you an email as soon as it is available!