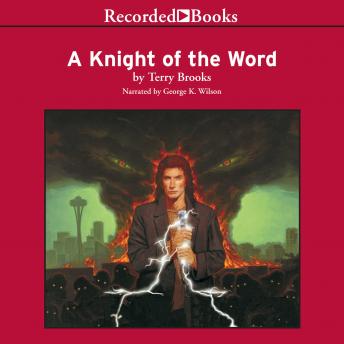 A Knight of the Word

With 14 national bestsellers to his credit, Terry Brooks has become an icon among fantasy fiction lovers. This stunning sequel to Running With The Demon lures listeners even further into the dark place where the battle for our souls rages on. By night, John Ross, A Knight of the Word, dreams of a nightmarish world governed by merciless demons, and by day he stalks these agents of evil in order to prevent the dreams from materializing. Having failed to prevent an unspeakable act of horror, he now suffers a crisis of faith. Vulnerable, no longer able to trust in the goodness of the Word, he has become a tempting prize for voracious demons. His only hope for survival may be a young girl who wields a powerful magic of her own. George Wilson's powerful narration so effectively builds tension and plants doubt that you find yourself as easily led astray as the errant Knight. You don't know what to believe or whom to trust in this suspenseful novel, where things happen fast and appearances are deceiving.

This was a surprising story and impelling read. Very " Koontz" like. I liked it very much as well as the first. Going to start the 3rd as soon as my next credit is ready!

Awesome story, I highly recommend this book! Terry Brooks has created a world that is surprisingly so close to the reality of today's society. I look forward to reading all of the stories in this very large series of books since this and Running with the Demon is the beginning.

The Knight of the Word was mesmerizing and brought to mind the events that are plaguing the world today in 2016. 28 years after the book was written! Terry Brooks is so talented and paints a vivid world of hope and despair. I highly recommend this audiobook my only complaint, (very minor) is that the narrators voice did not have the richness that I had hoped for. BUT don't let that detract you. I loved the book and am happy to have purchased it. Great audio book!!

Not a bad book, actually a good start to explaining what happens to the world.

This title is due for release on October 1, 2010
We'll send you an email as soon as it is available!