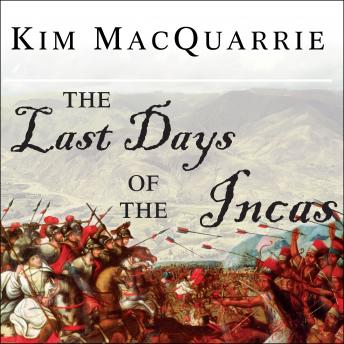 The Last Days of the Incas

In 1532, the fifty-four-year-old Spanish conquistador Francisco Pizarro led a force of 167 men, including his four brothers, to the shores of Peru. Unbeknownst to the Spaniards, the Inca rulers of Peru had just fought a bloody civil war in which the emperor Atahualpa had defeated his brother Huascar. Pizarro and his men soon clashed with Atahualpa and a huge force of Inca warriors at the Battle of Cajamarca. Despite being outnumbered by more than two hundred to one, the Spaniards prevailed-due largely to their horses, their steel armor and swords, and their tactic of surprise. They captured and imprisoned Atahualpa. Although the Inca emperor paid an enormous ransom in gold, the Spaniards executed him anyway. The following year, the Spaniards seized the Inca capital of Cuzco, completing their conquest of the largest native empire the New World has ever known. Peru was now a Spanish colony, and the conquistadors were wealthy beyond their wildest dreams.

But the Incas did not submit willingly. A young Inca emperor, the brother of Atahualpa, soon led a massive rebellion against the Spaniards, inflicting heavy casualties and nearly wiping out the conquerors. Eventually, however, Pizarro and his men forced the emperor to abandon the Andes and flee to the Amazon. There, he established a hidden capital, called Vilcabamba. Although the Incas fought a deadly, thirty-six-year-long guerrilla war, the Spanish ultimately captured the last Inca emperor and vanquished the native resistance.

Kim MacQuarrie lived in Peru for five years and became fascinated by the Incas and the history of the Spanish conquest. Drawing on both native and Spanish chronicles, he vividly describes the dramatic story of the conquest, with all its savagery and suspense. MacQuarrie also relates the story of the modern search for Vilcabamba, of how Machu Picchu was discovered, and of how a trio of colorful American explorers only recently discovered the lost Inca capital of Vilcabamba, which had been hidden in the Amazon for centuries.

This authoritative, exciting history is among the most powerful and important accounts of the culture of the South American Indians and the Spanish Conquest.

This title is due for release on September 17, 2007
We'll send you an email as soon as it is available!