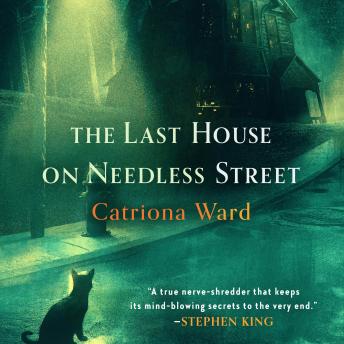 The Last House on Needless Street

'The buzz...is real. I've read it and was blown away. It's a true nerve-shredder that keeps its mind-blowing secrets to the very end.' - Stephen King

A World Fantasy Award and August Derleth Award Finalist!
An Indie Next Pick! A LibraryReads Top 10 Pick!
A Library Journal Editors' Pick! STARRED reviews from Library Journal and Publishers Weekly!
Named one of the '50 Best Horror Books of All Time' by Esquire!

'Brilliant....[a] deeply frightening deconstruction of the illusion of the self.' —The New York Times

Catriona Ward's The Last House on Needless Street is a shocking and immersive read perfect for fans of Gone Girl and The Haunting of Hill House.

In a boarded-up house on a dead-end street at the edge of the wild Washington woods lives a family of three.

A teenage girl who isn’t allowed outside, not after last time.
A man who drinks alone in front of his TV, trying to ignore the gaps in his memory.
And a house cat who loves napping and reading the Bible.

An unspeakable secret binds them together, but when a new neighbor moves in next door, what is buried out among the birch trees may come back to haunt them all.

I was sucked in immediately and loved every minute of this book! Well done!

The first part of the book could make restless listeners ready to hit the stop button but give it the chance to finish and you will be rewarded. The ending is great and left me ready to use my monthly credit for the authors next Title.

very strange and disturbing, that's all I got to say!

Long and drawn out. Took forever to finish because it just didn't hold my interest for long.

I read online reviews before purchasing this book. I was looking forward to a good read. WHAT A LET DOWN! I kept waiting for the basic writing to get better, let alone the story line. This was one of my least enjoyable listens in recent time.