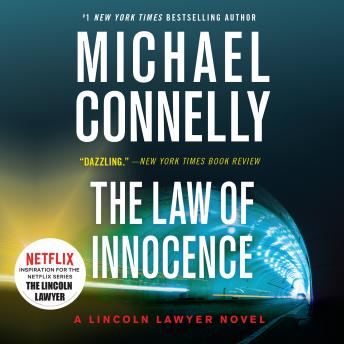 The Law of Innocence

#6 of A Lincoln Lawyer Novel

Lincoln Lawyer Mickey Haller is back on the job in this heart-stopping thriller from a renowned #1 New York Times bestselling author.

On the night he celebrates a big win, defense attorney Mickey Haller is pulled over by police, who find the body of a former client in the trunk of his Lincoln. Haller is immediately charged with murder but can’t post the exorbitant $5 million bail slapped on him by a vindictive judge.

Mickey elects to represent himself and is forced to mount his defense from his jail cell in the Twin Towers Correctional Center in downtown Los Angeles. All the while he needs to look over his shoulder—as an officer of the court he is an instant target, and he makes few friends when he reveals a corruption plot within the jail.

But the bigger plot is the one against him. Haller knows he’s been framed, whether by a new enemy or an old one. As his trusted team, including his half-brother, Harry Bosch, investigates, Haller must use all his skills in the courtroom to counter the damning evidence against him.

Even if he can obtain a not-guilty verdict, Mickey understands that it won’t be enough. In order to be truly exonerated, he must find out who really committed the murder and why. That is the law of innocence.

In his highest stakes case yet, the Lincoln Lawyer fights for his life and proves again why he is “a worthy colleague of Atticus Finch . . . in the front of the pack in the legal thriller game” (Los Angeles Times).

Was good until it got political. I read and listen to books to escape and relax. I don’t need to know nor do I care about the authors political views. More than likely this will be the last Michael Connelly book I will read, which is sad since I love the characters. The narrator was excellent.

Wow. So disappointing. Plot holes, unanswered questions and had to throw in political jabs. Last book from this author. Narrator was great though.

Would have given it four maybe five stars if he had not gone political. Mr Connelly should realize that somewhere around fifty percent of his audience share a different political view than he does and that people read his fiction to ESCAPE the bullshit of the real world. I’m a big Harry Bosch and Mickey Haller fan but if I encounter more of this crap I’m done.

I’ve read and enjoyed numerous books by Connelly. This was not his best effort. The plot was strained and ultimately anticlimactic. The writing, in particular the dialogue, was repetitive and occasionally outright clumsy. The narrator overly dramatic. For me a very disappointing read given the author’s previous work.

Excellent book, excellent narration. I love Michael Connelly’s books, and this is one of his best.

Disappointed. The story is weak from the start…no real suspense here. It was extremely annoying that he goes out of his way to make political statements that don’t flow with story line. This is supposed to be entertainment…an escape from the nonsense.

Loved it! I agree; keep politics out of it.

There is no reason to include the political sidebars. I listen to books to avoid politics and it is disappointing that the author cannot refrain from throwing in barbs - just the same as news stations. Very disappointing.

It breaks my heart to write a Connelly book just three stars. But, it seems this book was written for a movie. It was predictable as hell. Not one of Mr. Connelly’ best work. The cheap use of politics coulda been left out. You kinda alienate some of your fan base. The ending was way to easy.

Liked the premise. A little tedious at times. Not my favorite of Connellys.

we listened to the book while traveling home from Washington state to California. It kept us entertained and the Narrator was very good.

I think I have read all his books; I like them all but this one would be toward the bottom of the list. A bit gimmicky and pretty sentimental too. Funny to see reviewers turned off by the politics since all I remember is a mention of too many guns. Perhaps I missed a sarcastic remark about the then president.

For me, the book wasn’t very believable. I find it hard to believe that a noted defense attorney would shoot someone in his own garage, and then drive it around in the trunk of his car for a day. And then to be kept in jail for a couple of months … didn’t work for me. Love all of the other books.

Connelly hits a HR again... Real and gritty characters make the Lincoln Lawyer series worth listening to over and over. I enjoy it when good old Harry Bosch ends up in the story lines. The narrator brings Mickey Haller alive.

To much reality, politics and dragging out details to much. The ending should have had more to it. For all that Mick had been through and then nothing hardly happened. Really wish he would have gotten Berg a lot better also. The ending was rushed.

I love and have read all of Michael Connelly's books. I disagree that the book got political. There were a few mentions of the pandemic and facts relating to it, but not overly political at all, just relevant to the times we are living in. i did not think there were any political jabs inserted by the authot. How can you talk about what is going on at the time without referring to the pandemic and the government response to it.

Loved the story, and I am a fan of Michael Connelly’s books. The narration was also good. I do not share the views of the reviewers who did not like the politics inserted into the book. Perhaps because I share the view of the author. I also enjoyed learning about the judicial system, and was intrigued by the insertion of the first impressions of the pandemic. It made it more relevant to these strange times.

Excellent read, the plot keeps you reading. Informative on the law and the actual judicial system from supposed to be and what it actually is. The characters were developed in previous books but it felt like they were known without reading the previous books

This was a great mystery tale and the narration was excellent.