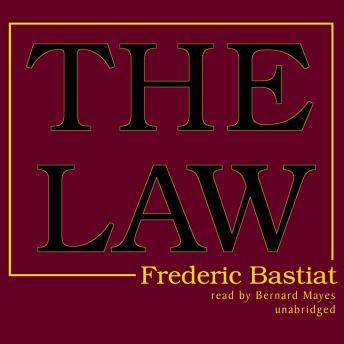 First published as a pamphlet in June 1850, The Law is already well over 150 years old, and it will still be read when another century has passed.
America now faces the same situation France did in 1848 and the same socialist-communist plans and ideas adopted there are now sweeping America-the collapse of Communism in Eastern Europe notwithstanding. Bastiat's explanation of and arguments against socialism are as valid today as they were when written, and his ideas deserve serious consideration.
"Socialism, like the ancient ideas from which it springs, confuses the distinction between government and society. As a result of this, every time we object to a thing being done by government, the socialists conclude that we object to its being done at all. We disapprove of state education. Then the socialists say that we are opposed to any education. We object to a state religion. Then the socialists say that we want no religion at all. We object to a state-enforced equality. Then they say that we are against equality. And so on, and so on. It is as if the socialists were to accuse us of not wanting persons to eat because we do not want the state to raise grain."-Frédéric Bastiat

This title is due for release on November 16, 2012
We'll send you an email as soon as it is available!