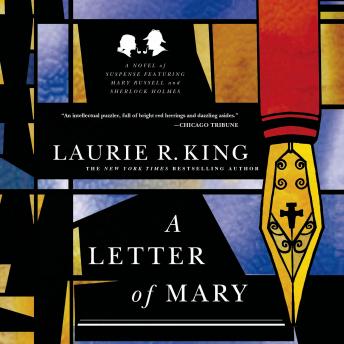 A Letter of Mary: A Novel of Suspense Featuring Mary Russell and Sherlock Holmes

The third book in the Mary Russell-Sherlock Holmes series.

It is 1923. Mary Russell Holmes and her husband, the retired Sherlock Holmes, are enjoying the summer together on their Sussex estate when they are visited by an old friend, Miss Dorothy Ruskin, an archeologist just returned from Palestine. She leaves in their protection an ancient manuscript which seems to hint at the possibility that Mary Magdalene was an apostle--an artifact certain to stir up a storm of biblical proportions in the Christian establishment. When Ruskin is suddenly killed in a tragic accident, Russell and Holmes find themselves on the trail of a fiendishly clever murderer. A Letter of Mary is brimming with political intrigue, theological arcana, and brilliant Holmesian deductions.

Letter of Mary: A Novel of Suspense Featuring Mary Russell and Sherlock Holmes