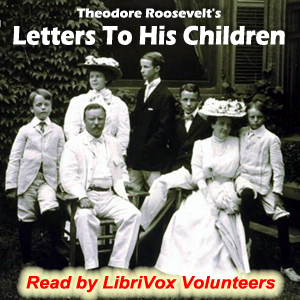 Letters to His Children

The strong, vigorous, exalted character of a doting father who loved playing with his children and their pets, even while serving as the President of the United States, stands revealed in this selection of letters he wrote his children throughout their school years. They shed light on the cheerful man who remained throughout his life as pure and gentle as the soul of a child, plus many little reveals that there were squirrels nesting in the presidential bedroom, rats in the basement, and children's pranks that damaged the White House artwork! Many of these letters are considered valuable guides for youth in all ranks of life, notably those on the relative merits of civil and military careers, and the proper proportions of sport and study. Only a short time before he died, Teddy Roosevelt said "I would rather have this book published than anything that has ever been written about me." ~ Summary by Michele Fry

NOTE: Roosevelt gave titles to all his letters, and all letters in this audio collection are recorded in sequential order with their titles. Most are too short to be published as separate audio files, thus several have been combined in most cases.

Fascinating to see the relationship of a President with his children