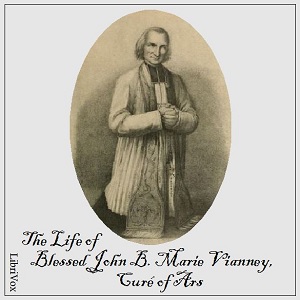 The Life of Blessed John B. Marie Vianney, Curé of Ars

Jean-Baptiste-Marie Vianney, T.O.S.F., (8 May 1786 – 4 August 1859), commonly known in English as St John Vianney, was a French parish priest who is venerated in the Catholic Church as a saint and as the patron saint of all priests. He is often referred to as the "Curé d'Ars". He became internationally notable for his priestly and pastoral work in his parish because of the radical spiritual transformation of the community and its surroundings. Catholics attribute this to his saintly life, mortification, his persevering ministry in the sacrament of confession, and his ardent devotion to the Blessed Virgin Mary and to Saint Philomena.

This short biography of this beloved saint was written before he was canonized in 1925. (Summary Adapted from Wikipedia)

Life of Blessed John B. Marie Vianney, Curé of Ars

This title is due for release on January 16, 2017
We'll send you an email as soon as it is available!