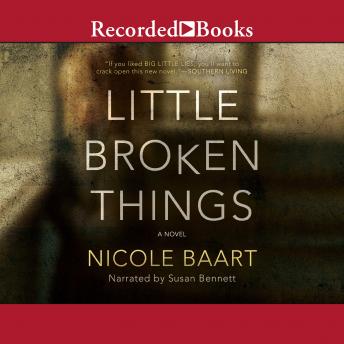 'If you liked Big Little Lies, you'll want to crack open this new novel by Nicole Baart.' -Southern Living An engrossing and suspenseful novel for fans of Liane Moriarty and Amy Hatvany about an affluent suburban family whose carefully constructed facade starts to come apart with the unexpected arrival of an endangered young girl. I have something for you. When Quinn Cruz receives that cryptic text message from her older sister Nora, she doesn't think much of it. They haven't seen each other in nearly a year and thanks to Nora's fierce aloofness, their relationship consists mostly of infrequent phone calls and an occasional email or text. But when a haunted Nora shows up at the lake near Quinn's house just hours later, a chain reaction is set into motion that will change both of their lives forever. Nora's 'something' is more shocking than Quinn could have ever imagined: a little girl, cowering, wide-eyed, and tight-lipped. Nora hands her over to Quinn with instructions to keep her safe, and not to utter a word about the child to anyone, especially not their buttoned-up mother who seems determined to pretend everything is perfect. But before Quinn can ask even one of the million questions swirling around her head, Nora disappears, and Quinn finds herself the unlikely caretaker of a girl introduced simply as Lucy. While Quinn struggles to honor her sister's desperate request and care for the lost, scared Lucy, she fears that Nora may have gotten involved in something way over her head-something that will threaten them all. But Quinn's worries are nothing compared to the firestorm that Nora is facing. It's a matter of life and death, of family and freedom, and ultimately, about the lengths a woman will go to protect the ones she loves.

Definitely a page-turner. The characters were quite well-developed and brought to life by the narrator. Unfortunately I guessed the big secret revealed at the end pretty early on in the book, but it did not mar my enjoyment. I would read another book by this author.

I had a free VIP credit and used it on this title! I really enjoyed this book! It was written well and the narration was excellent! The storyline was engaging and I flip-flopped back-and-forth with a prediction of the ending. I was wrong! That’s always a good thing! This book kept wondering. Definitely worth the read!

Gripping story. Kept my attention from beginning to end. I like how the women and the mothers and the sisters all came to their own healing. I did guess at the big reveal in the ending quite early in the book, but still enjoyed the story and would read another by this author.

Good book with a lot of plot twists

Well developed characters. Definitely a page turner. Some parts felt unnecessary and made the book a little long. Narration was done very well

Loves this story and almost predicted the ending. but not quite. The narrator also did a fabulous job.

Raced through this! Characters were compelling, layered. The storyline pieces together a little at a time. The ending was so redemptive, fulfilling. I enjoyed this audiobook!

Unfortunately frequently way overdone the plot could’ve been shortened some of the pompous repetitive adjectives could’ve been deleted it seemed like a romance novel written with pretension. However the character’s Were interesting and the evolving of the plot certainly kept me interested just wish you had been edited and shortened thank you so much

Although in felt a little cliche and predictable at times this book was still an enjoyable read.

This was a really good book! I enjoyed it, and it kept me interested.

It was a tough read, but I made it to the end.

I LOVE this book and the narrator! I thought I knew, but second guessed myself twice and was still bamboozled. I have to buy the hard copy, too good to not own. Loved listening at work. Easy enough to follow when having to pause on a regular basis.

I didn’t bother to finish it

Thai book was contrived and disappointing. All the characters predicable and uninteresting. The summary by Audiobooks promised fans of Liane Moriarity would like this. This was a FAR CRY from the brilliance of LM, who develops wonderful stories of mystery and intrigue but injects humor, and impeccable character development. Don’t read it if you actually like Moriarity. The narrator was good. She did what she could with the boring characters.

I really enjoyed this book! The narrator was good

Great story. Really enjoyed it. It keeps you guessing.

Was grazing through the free monthly subscription books and came across this. I am so happy I chose this one. Very good, fast paced, keep you guessing, kinda book.

Kept our interest, got a little long/wordy. The reader was good, didn't get as 'playacting' as some with a lot of voices etc.