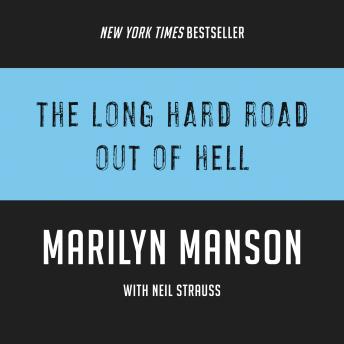 The Long Hard Road Out of Hell

When this bestselling autobiography was originally released, readers were shocked: The Long Hard Road Out of Hell was the darkest, funniest, most controversial, and best-selling rock book of its time—and it became the template, both visually and narratively, for almost every rock book since. Marilyn Manson is not just a music icon, it turned out, but one of the best storytellers of his generation. Written with bestselling author Neil Strauss and modeled on Dante's Inferno, this edition of The Long Hard Road Out of Hell features a bonus chapter not in the original hardcover. In the shocking and candid memoir, Manson takes readers from backstage to emergency rooms to jail cells, from the pit of despair to the top of the charts, and recounts his metamorphosis from a frightened Christian schoolboy into the most feared and revered music superstar in the country. Along the way, you'll hear what happens to fans—and celebrities—who dare to venture backstage with the one of the world's most dangerous rock stars. In the words of Elle magazine, the book 'makes Madonna's infamous Sex seem downright wholesome in comparison.'