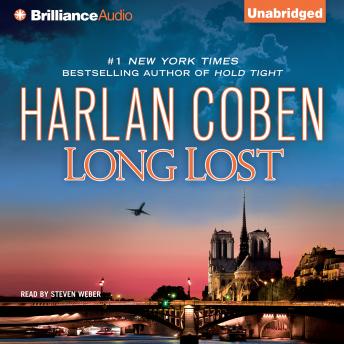 Myron Bolitar hasn’t heard from Terese Collins since their torrid affair ended ten years ago, so her desperate phone call from Paris catches him completely off guard. In a shattering admission, Terese reveals the tragic story behind her disappearance—her struggles to get pregnant, the greatest moment of her life when her baby was born…and the fatal accident that robbed her of it all: her marriage, her happiness, and her beloved only daughter.Now a suspect in the murder of her ex-husband in Paris, Terese has nowhere else to turn for help. Myron heeds the call. But then a startling piece of evidence turns the entire case upside down, laying bare Terese’s long-buried family secrets…and the very real possibility that her daughter may still be alive.In grave danger from unknown assailants in a country where nothing is as it seems, Myron and Terese race to stay a step ahead of Homeland Security, Interpol, and Mossad. Soon they are working at breakneck pace not only to learn what really happened to Terese’s long-lost little girl—but to uncover a sinister plot with shocking global implications.“[A] compulsive page-turner.… The ‘this could be me’ factor lends poignancy to the thrills and chills.” —Publishers Weekly (starred review)“[Coben’s] genius is to make the seemingly mundane terrifying.” —Booklist (starred review)

Love the book but this is not Myron’s voice…I hate Steven Weber for the voice of Myron and Win. I am too used to Johnathan Marosz knew how to capture the essence of both characters and Weber just falls short. The narrator really does make the story so it sucks that Marosz doesn’t finish the series out.

HarlanCoben he makes me laugh when I am reading/ listening to Simon Bolitar situations. And here he is at his best. Love Coben. I highly recommend this book

This title is due for release on March 31, 2009
We'll send you an email as soon as it is available!