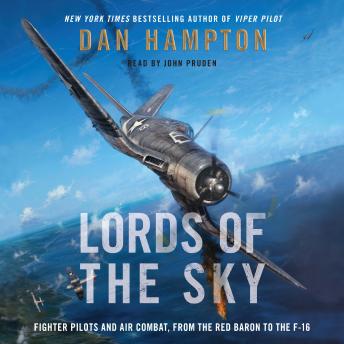 Lords of the Sky: Fighter Pilots and Air Combat, from the Red Baron to the F-16

NATIONAL BESTSELLER • The definitive history of combat aviation and fighter aircraft, from World War I to present

INCLUDES 32 PAGES OF PHOTOGRAPHS AND 12 MAPS

Lords of the Sky is the “dramatic, fast-paced, and definitive' (Michael Korda) history of fighter pilots and aircraft and their extraordinary influence on modern warfare, masterfully written by 'one of the most decorated pilots in Air Force history” (New York Post). A twenty-year USAF veteran who flew more than 150 combat missions and received multiple Distinguished Flying Crosses, Lt. Colonel Dan Hampton draws on his singular firsthand knowledge, as well as groundbreaking research in aviation archives and rare personal interviews with little-known heroes, including veterans of World War II, Korea, and Vietnam. Hampton (the New York Times bestselling author of Viper Pilot) reveals the stories behind history's most iconic aircraft and the aviators who piloted them: from the Sopwith Camel and Fokker Triplane to the Mitsubishi Zero, Supermarine Spitfire, German Bf 109, P-51 Mustang, Grumman Hellcat, F-4 Phantom, F-105 Thunderchief, F-16 Falcon, F/A-18 Super Hornet, and beyond. In a seamless, sweeping narrative, Lords of the Sky is an extraordinary account of the most famous fighter planes and the brave and daring heroes who made them legend.

Narration was excellent as usual from John but overall I'd say the book perhaps spends a little too much time. The browser history of the war at points is understandable and not what I got the book for. Personally I had hoped for more of the personal stories of histories aviators.