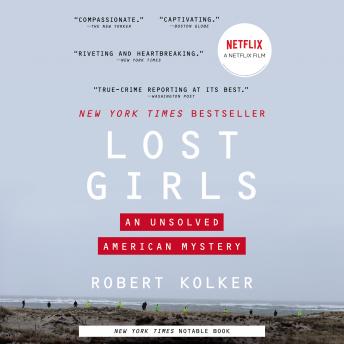 The bestselling account of the lives of five young women whose fates converged in the perplexing case of the Long Island Serial Killer.


One late spring evening in 2010, Shannan Gilbert—after running through the oceanfront community of Oak Beach screaming for her life—went missing. No one who had heard of her disappearance thought much about what had happened to the twenty-four-year-old: she was a Craigslist escort who had been fleeing a scene—of what, no one could be sure. The Suffolk County police, too, seemed to have paid little attention—until seven months later, when an unexpected discovery in a bramble alongside a nearby highway turned up four bodies, all evenly spaced, all wrapped in burlap. But none of them Shannan’s.

There was Maureen Brainard-Barnes, last seen at Penn Station in Manhattan three years earlier, and Melissa Barthelemy, last seen in the Bronx in 2009. There was Megan Waterman, last seen leaving a hotel in Hauppauge, Long Island, just a month after Shannon’s disappearance in 2010, and Amber Lynn Costello, last seen leaving a house in West Babylon a few months later that same year. Like Shannan, all four women were petite, in their twenties, and had come from out of town to work as escorts, and they all had advertised on Craigslist and its competitor, Backpage.

Long considered “one of the best true-crime books of all time” (Time), Lost Girls is a portrait of unsolved murders in an idyllic part of America, of the underside of the Internet, and of the secrets we keep without admitting to ourselves that we keep them.

This is a good read. I do understand what people meant when they said he jumps around from character to character. I suggest doing what I did by accident, which was watch the six part ANE docuseries about the girls. It also helped search and for specific podcasts that dealt with this crime. Once I had a visual and A specific layout of the situation then hearing about the girls made more sense and I understood better as I listen to the audiobook. If you go audio book first I think it will then be reinforced if you watch the Killing Season onA

I enjoyed this audiobook. The narrator did a good job and I liked the.content of the book. I see others didn't like how he jumped a round and I also found it a bit hard to follow at times. But I became invested in the victims stories and their families.

Given the reviews & the first three minutes of the book, I was hoping for an awesome read. I was very disappointed. It was all over the place. Jumping from story to story. I understand want to tell each girls story but the back & forth was too much.

This booked really had me intrigued. It felt it was very honest while still trying to respect the families involved. I feel so sad in the way this case was handled and that maybe if the police had of taken it seriously from the start and responded maybe the result would have been different and the killer found. It was hard to follow at the start darting from one girl to another but after some time it all made sense. Great read.

My overall thought? Extremely hard to follow! I really wanted to like this book but the story telling was very hard to follow. The book was written to explain characters whom instead of standing out end up being jumbled together, not worth listening :(

Very intriguing book. The narrator was excellent. It is very clear that the author spent countless hours interviewing and connecting the many pieces of this mystery. Very respectful of the victims families while also grippingly honest.

I had never read anything by this author, Kolker, and I fear that I forever spoiled. After reading"In Cold Blood", I had a similar reaction, knowing that I would likely no longer enjoy light and badly written stories by Danielle Steele or even Sidney Sheldon--the types of books you pick up at the airport for a quick distraction. This is a fascinating story, and my only objection has to do more with audiobooks.com than with the work itself. The absence of chapters or any ability to locate a specific part, especially inside a treasure like this book which is deeply detailed and requires steady concentration, sometimes impossible when driving and distracted by road rage. The plot is gripping, and this author's style of writing and the way he varies sentence structure so beautifully combine to produce one of the best choices I've made. Sean Pratt is a marvelous narrator who never overacts but gets the story across with the perfect tone and tempo. Anyone who is addicted to audio books the way I am can appreciate how a narrator can almost ruin the experience. I've given up on Ann Rule books, for example, because the writing is unimaginative and monotonous, and when she herself chooses to read her creation, it's almost impossible to overlook the voice to hear the meaning. But this guy is great, and I would purchase anything he reads. The author is very talented, and I can happily recommend this to anyone who loves true crime stories with fascinating puzzles to ponder. I really wish audiobooks.com would add some search partition features.

This is a great audiobook! It kept my attention the entire time, and it leaves you just wanting to know more! It's fascinating, gripping, and the fact that the mystery continues makes it even more intriguing.. Shannon is a mystery in and of herself... I highly recommend - Fantastic narrator as well!