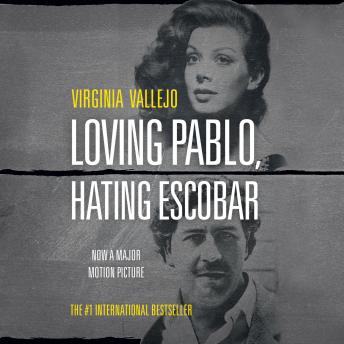 Pablo Escobar was one of the most terrifying criminal minds of the last century. In the decade before his death in 1993, he reigned as the head of a multinational cocaine industry and brought the Colombian state to its knees, killing thousands of politicians, media personalities, police, and unarmed citizens.

In the 1980s, Virginia Vallejo was Colombia’s most famous television celebrity: a top-rated anchorwoman and a twice-divorced socialite who had been courted by the country’s four wealthiest men. In 1982, she interviewed Pablo Escobar on her news program, and soon after, they began a discreet—albeit stormy—romantic relationship. During their five-year affair, Escobar would show Vallejo the vulnerability of presidents, senators, and military leaders seeking to profit from the drug trade. From Vallejo’s privileged perspective and her ability to navigate the global corridors of wealth and high society, Escobar gained the insight to master his manipulation ofColombia’s powerful elite and media.

Loving Pablo, Hating Escobar chronicles the birth of Colombia’s drug cartels: the kidnappers, the guerilla groups, and the paramilitary organizations. It is, above everything, a great love story—a deep and painful journeythrough a forbidden relationship—that gives us an intimate vision of thelegendary drug baron who left his mark on Colombia, Latin America, the United States, and the world forever.

Although the book and its story line is very interesting, her reading is so overly dramatic that there are no high points or low points. It’s all one dramatic tone, one big dramatic setting. It’s hard to imagine these conversations actually happening, as they are so unreal in their level of insanity. I’m curious to see the movie, but the book was definitely one I had to push through to finish.

Seduced by a Narco, Virginia is guilty of crimes just like her lover Escobar. She never blames herself for anything that happen to the people of Columbia. Rather, she let's her love for Pablo obscure her judgment. Another gold digger who slept with many rich men for the sole purpose of not starting to death. She strongly believe that Pablo was her Knight/Narco is shining Armor/Coke. Overall, this book gives a great insight from a beautiful and intellectual whore who Pablo manipulated from the start. Other than Pablo's love, all Virginia could do is compare the wealth of criminal masterminds whether they worked for a Cartel or the government. Corruption at its finest in Latin America.