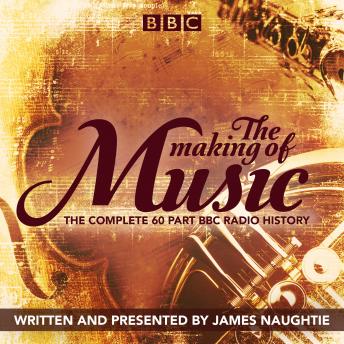 The Making of Music: The complete landmark BBC Radio 4 series

In this major BBC Radio 4 series, James Naughtie uncovers the roots of our music and reveals the soundtrack to our own history.

The history of classical music is inextricably linked with the places it was written, its purpose and its patrons, as well as with politics, war and social change. From the earliest music of the monasteries, to the court and church music of the Renaissance and Reformation and beyond, composers have always changed with the times.

In these programmes, James Naughtie reveals how the chance happenings of history built a classical tradition that tells a glittering and inspiring story. His journey takes him from early beginnings to the present day, where he examines the current state of classical music.

This epic and important series features extracts from the music itself, as well as the voices of Benedict Cumberbatch, Alison Carney, Laurence Fox and Simon Russell Beale alongside James Naughtie’s own.

This title is due for release on August 10, 2017
We'll send you an email as soon as it is available!