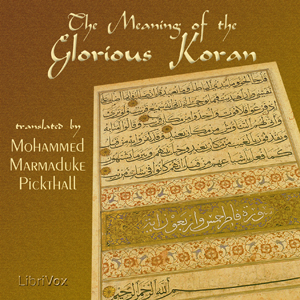 The Meaning of the Glorious Koran

The Koran (Qur'an) is regarded by Muslims as the word of God (Allah) as revealed to the prophet Muhammad. It is divided into 114 chapters (surahs), arranged roughly by length. This version, The Meaning of the Glorious Koran, is a widely used English translation of the Koran by a Muslim Englishman. Many Muslims, however, including Pickthall, believe that true translations of the Koran from the original Arabic are impossible, and see translations into other languages only as useful interpretations. (Summary by Leon Mire)

The Glorious Quran is the most important and beautifully written book I've ever read. However, the narrator was absolutely terrible, almost to the point it could be considered a sin, in the least disrespectful. She sounded like someone was making her read it and had no interest in the Blessed revelations. Don't purchase this reading, read it yourself. if you want it on audio, there are much better versions available on YouTube.

love it the joy I have received