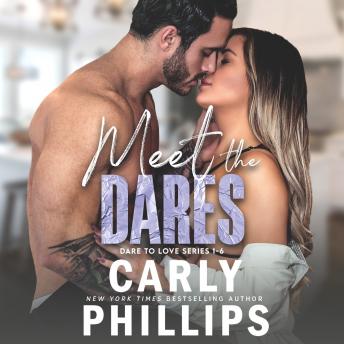 Since finding out his father had another family on the side, Ian Dare swore to be the upstanding, responsible man his cheating parent had never been. But one glimpse of sensual Riley Taylor arouses his dominant and protective instincts. Ian is entranced. He will do anything to possess her-and does. But any future with Riley must include him extending an olive branch to the half-brother who is a constant reminder of the pain he'd rather forget.

Quarterback Alex Dare had it all-an all-star football career, his choice of willing women-until injury forces him into early retirement. When he is offered a position with a rival team, he's intrigued, but there's a catch. He'll be working alongside the same woman he callously hurt when she got too close for comfort.

Dylan Rhodes, travel director for the Miami Thunder, doesn't do anything halfway-in bed or out-so when he decides to pursue Olivia Dare, he goes all in. The Pro-Bowl takes them to Arizona, and Dylan is determined to make sure their time together isn't all business. What happens while at the luxury resort is life-altering, but when Olivia admits her deepest secret, will Dylan be able to prove he's a man with staying power?

After a mind-blowing one-night stand with Meg Thompson, cop Scott Dare finds himself unable to walk away-not when their bodies respond to each other with such heated intensity. He's drawn to her unique combination of strength and vulnerability, and suddenly this one-night stand is looking more like forever-at least until Meg's past catches up with her.

At eighteen, Grey Kingston left everything behind to seek fame and fortune as the lead guitarist for Tangled Royal. Yet at the height of his career, he's ready to return to a simpler life and the woman he left behind: Avery Dare. But moving on isn't as easy as Grey would like. When Avery is threatened by a stalker, it becomes clear his fans don't want him to retire, nor do they want Avery in his life. Can this pair's love survive the fallout?

There are some guys you just don't touch. But when her brother's best friend is up for grabs and willing, she simply can't resist. The next morning it ends in the worst way possible. But when the Ella finds herself stranded on a tropical island with a hurricane bearing down, it's Tyler's chance to make amends and show the woman he's never forgotten that he's coming after her, in more ways than one.