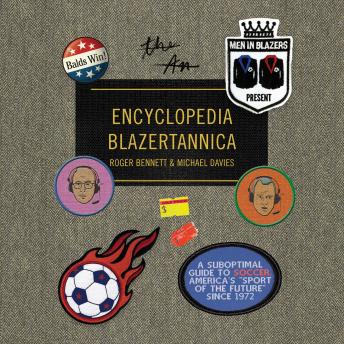 Men in Blazers Present Encyclopedia Blazertannica: A Suboptimal Guide to Soccer, America's 'Sport of the Future' Since 1972

Soccer has been America's Sport of the Future since 1972. Propelled by the rise of the World Cup, Premier League, the glory of the United States Women's National Team, Lionel Messi's DemiGod-esque talent and repeat exposure to Cristiano Ronaldo's preening abs, that Future has finally arrived.

The Men in Blazers are two English-born, soccer-obsessed broadcasters who have savored the dizzying growth of the game along with millions of Americans, as if it was a rollicking, sporting telenovela playing out in real life. Written in such a way that fully immerses Americans in the history and culture of the world's game, their Encyclopedia Blazertannica relives the careers of such greats such as George Best, Maradona, Beckham... and Alexi Lalas. It examines fan culture, from the tactical variations of scarf tying, to the pathos of England's classic, yet doomed, World Cup theme songs, and explores the complex physics and ethics of both celebratory knee slides and fights between players, along with such burning questions as how professional footballers deal with hair loss. Any listener will feel as if they've had a front-row seat for the classic matches--seeing every dive and missed penalty kick, and hearing every vulgar chant--and will emerge with a deeper appreciation for the dodgy haircuts and ill-judged neck tattoos that populate world football.


Includes bonus material exclusive to the audiobook: an extended clip from the Men in Blazers podcast