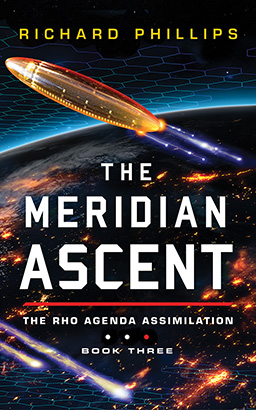 In their battle to save Earth from becoming another conquest of the alien Kasari Collective, Mark and Heather Smythe have struck crucial blows against the enemy. But their best efforts have still failed to derail the completion of the wormhole gateway that would give the insidious extraterrestrial invaders access to the planet—and doom humankind as helpless slaves of the Kasari hive mind.

The Smythes and their intrepid allies—including the mentally altered humans, The Enhanced—stand ready to beat back the Kasari onslaught once and for all. Not by mortal combat, but with scientific cunning. Still, the success of their plan depends on a daring stealth mission into the heart of the aliens' nerve center on Earth. And multiple threats lie in wait—including the ruthless Kasari commander, a brutal double agent with a deadly vendetta to settle, and the alien entity Khal Teth, who wears a human face but is ready to strike with monstrous force.

In this stunning conclusion to the Rho Agenda Assimilation by the bestselling author of The Second Ship, the small but fierce band of altered humans and Earth's resistance fighters face their greatest opportunity to stop the Kasari. But with the remnants of humanity and a battered Earth caught in the cross fire, can they secure a victory without sacrificing everything they're trying to protect?

This title is due for release on August 8, 2017
We'll send you an email as soon as it is available!