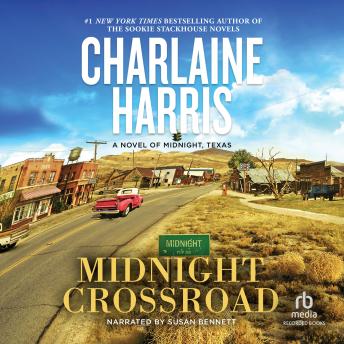 FIRST IN A NEW TRILOGY - From Charlaine Harris, the bestselling author who created Sookie Stackhouse and her world of Bon Temps, Louisiana, comes a darker locale-- populated by more strangers than friends. But then, that' s how the locals prefer it. Welcome to Midnight, Texas, a town with many boarded-up windows and few full-time inhabitants, located at the crossing of Witch Light Road and Davy Road. It' s a pretty standard dried-up western town. There' s a pawnshop (someone lives in the basement and is seen only at night). There' s a diner (people who are just passing through tend not to linger). And there' s new resident Manfred Bernardo, who thinks he' s found the perfect place to work in private (and who has secrets of his own). Stop at the one traffic light in town, and everything looks normal. Stay awhile, and learn the truth...

i’ll be honest, true blood is one of my favorite tv shows. i ordered all the books but never sat down and read them. didn’t have any experience with charlaine’s writing. i watched the NBC show of midnight, texas. found it tacky and boring. didn’t have high expectations going into the book. i’m VERY glad i went with the audiobook version as well as reading it on my own!! i absolutely loved the narrator, especially when she narrated mr. snuggles’ bits, hilarious! i listened on my commute to and from college, reading chapters between when i had down time. but i LOVED the narrator so much, i would usually just listen to the chapters i already read. i really liked the way the story progressed, i didn’t think it was meandering at all (unlike some of the other reviews). it is everything i ever wanted in a modern urban fantasy. i don’t think it paints white people in a bad light at all. i’m white, as are most of the characters. just because the story involves a few white supremacy villains, doesn’t mean the author is some antifa leftist nut! in fact, since most of the main characters are white and protagonists, i think it paints white southerners in a more positive light. i’m also pretty sure ms. harris was in college long before the cupcake generation took over the positioning of “liberal stereotypes.” i liked the many perspectives, i liked the mystery (if i hadn’t watched the show, i would never have guessed who the real killer was). charlaine didn’t rely on cheap action gimmicks to make her story suspenseful and interesting. just purchased the second audio book in the series, i’m a few chapters in and i’m equally enthralled as i was with the first. YOU GO CHARLAINE! and you go narrator!!!!

I absolutely recommend this book!!! I love Charlaine's books. She certainly did not disappoint!!!

Weird story. Couldn’t quite get into it, but listened anyway, simply out of curiosity. The plot was flat, no sparks or real energy. A few tweaks here and there might have redirected the path to a pretty good story. Recommend? No.

Absolutely the worst book I've ever listened to. Meandering, pointless story line. It's like the author took all of the liberal stereotypes she learned in college and created characters to fit the narrative. White people = Bad. Vampires and Witches = Good.

It takes a little time to get into this book since there are a number of characters added very quickly, but I enjoyed it and the story. Give it some time.

Such a peculiar town. I loved all the characters and their quirks. good narration as well.

Great story! I watched the tv show first so I already had preconceptions about the tale but it didn’t change my enjoyment of this book. The characters are unique and the mystery is a head scratcher so all in all a great listen. Highly recommended.

Great narrator, several perspectives but I felt invested in all of them by the end.

loved this first book in the trilogy. well worth the listen.

it's such a likable read and how do you explain the nice reality of it if... just if

I've read the books but since having a stroke, it's extremely difficult. I enjoy listening to all types of genres and I really like Charlaine Harris.

Great book! Narration great to! Definitely a must download book!

Extremely intriguing and entertaining. I didn't put it down for 3 days! More mystery than what I was expecting (sci-fi/fantasy).