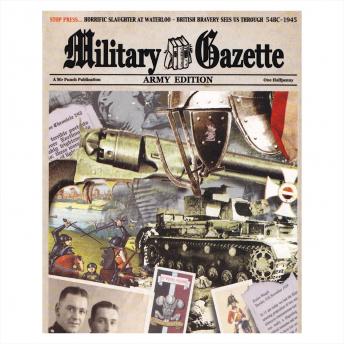 The Military Gazette is a vivid portrait of military life through the centuries, as lived by the generations of men and women who took part. We eavesdrop on some of the most turbulent and colourful events, from bow-and-arrow to atomic bomb, and we draw on the first-hand experiences of Englishmen and women, as they provide a fascinating and often moving description of the British at war. In the Army edition we follow the fortunes of the British soldier from the Roman invasion of Britain to his defeat at Dunkirk, from the terrible horrors of the Battle of Culloden to his courage against the Zulu's at Rourke's drift, from heroes to cowards we hear their stories as they move implacably from bows to bayonets. Narrated by Eileen Atkins; Cheryl Campbell; Nigel Davenport; Alex Jennings; Richard Johnson; Hugh Laurie; Michael Maloney; Geoffrey Palmer; Michael Pennington; Prunella Scales; Samuel West, and John Wood