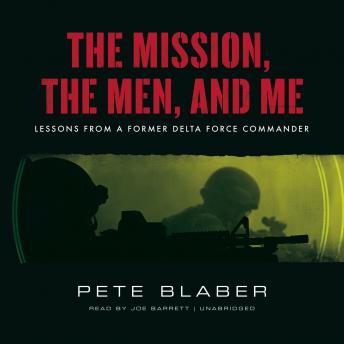 The Mission, the Men, and Me: Lessons from a Former Delta Force Commander

As a commander of Delta Force-the most elite counterterroristorganization in the world-Pete Blaber took part in some of the most dangerous,controversial, and significant military and political events of our time. Nowhe takes his intimate knowledge of warfare-and the heart, mind, and spirit ittakes to win-and moves his focus from the combat zone to civilian life.
As the smoke clears from exciting stories about never-before-revealedtop-secret missions that were executed all over the globe, readers will emergewiser, more capable, and more ready for life's personal victories than theyever thought possible.

Mission, the Men, and Me: Lessons from a Former Delta Force Commander

This title is due for release on December 15, 2013
We'll send you an email as soon as it is available!