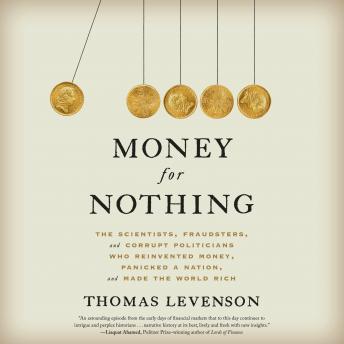 Money for Nothing: The Scientists, Fraudsters, and Corrupt Politicians Who Reinvented Money, Panicked a Nation, and Made the World Rich

The sweeping story of the world’s first financial crisis: “an astounding episode from the early days of financial markets that to this day continues to intrigue and perplex historians . . . narrative history at its best, lively and fresh with new insights” (Liaquat Ahamed, Pulitzer Prize–winning author of Lords of Finance)

In the heart of the Scientific Revolution, when new theories promised to explain the affairs of the universe, Britain was broke, facing a mountain of debt accumulated in war after war it could not afford. But that same Scientific Revolution—the kind of thinking that helped Isaac Newton solve the mysteries of the cosmos—would soon lead clever, if not always scrupulous, men to try to figure a way out of Britain’s financial troubles.

Enter the upstart leaders of the South Sea Company. In 1719, they laid out a grand plan to swap citizens’ shares of the nation’s debt for company stock, removing the burden from the state and making South Sea’s directors a fortune in the process. Everybody would win. The king’s ministers took the bait—and everybody did win. Far too much, far too fast. The following crash came suddenly in a rush of scandal, jail, suicide, and ruin. But thanks to Britain’s leader, Robert Walpole, the kingdom found its way through to emerge with the first truly modern, reliable, and stable financial exchange.

Thomas Levenson’s Money for Nothing tells the unbelievable story of the South Sea Bubble with all the exuberance, folly, and the catastrophe of an event whose impact can still be felt today.